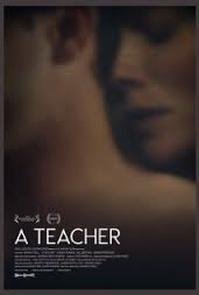 Poster for the film
A Teacher is a raw, emotional, and taboo-like film about a teacher's love for a high school student.  Similar to my other Movie of the Week pick in an earlier post, The Lifeguard,  A Teacher touches on the subject of a love that is frowned upon in our society, however, unlike the aforementioned title, A Teacher does not have a lighter side to it.  There is no true solace in this film, and there certainly is no closure.

Diana Watts (Lindsay Burdge) is a single woman teaching in a Texas high school that has a unique connection with Eric Tull (Will Brittain).  The two share flirtatious glances towards one another, but eventually, those glances turn into a full fledged secret affair.

The two would meet at Ms. Watts empty apartment, or Tull's empty house, or even a family friend's ranch to keep their "love" going strong and secretive.  Intimate texts and conversations are shared as Watts and Tull get further intertwined, physically and emotionally.

Throughout the film, we see Watts, who at one time was comfortable with who she was become an emotional trainwreck the further the romance goes.  Her avoidance of her brother and their situation with their ailing mother along with her trepidation around colleagues at work and their ramblings break down Watts' shell and we get a view into her broken, lonely, and self-conscious life.

A truly telling scene comes toward the end of the film where Watts' and Tull are making love in the teacher's bedroom.  Mid-way through the interaction, she breaks down, crying hysterically.  After several moments of crying, she regains her composure and attempts to reignite the fire that was just burning.  Tull's face is priceless as he is as truly concerned about the situation as we are who are viewing it.

A Teacher is a film that will stick with you for a long, long time due to its realism, deep message and great performances.  An overall great film.