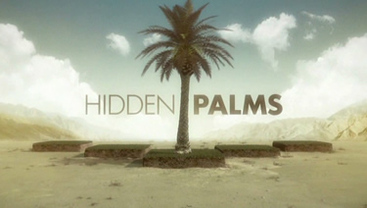 Photo courtesy of Google.com
Hidden Palms was a CW Network Original Series that aired in 2007 and only lasted eight episodes.  Placed at an unfortunate Wednesday time slot, doubled-up episodes and shows on July 4th, Hidden Palms never really had a chance to survive, however, was a clever, well written teen-drama by Kevin Williamson, creator of Dawson's Creek and writer for Scream.

The story revolves around Johnny Miller (Taylor Handley) and his recent move to Palm Springs with his mother and his new stepfather.  Johnny's father had recently committed suicide, sending the 16-year old into a drug and rehab ranch.  Johnny is apprehensive about the move, however, attempts to accept the changes.  During his first night, he meets his neighbor, Cliff Wiatt (Michael Cassidy), his other neighbor and science genius Liza Witter (Ellary Porterfield), and the inevitable beautiful and mysterious girl, Greta Matthews (Amber Heard).

Cliff tells Johnny a dark secret that sets in motion the main plot of the show:  What happened to Eddie Nolan?

Dozens of twists and turns, misdirection and paranoia set Johnny, Cliff, Greta, and Liza on a summer adventure filled with secrets, lies, and betrayals.

The chemistry between these actors is fantastic, despite rumors that Cassidy and Handley did not get along well with one another off-camera.  Amber Heard is absolutely stunning in the show and honestly, gives her best acting performances of her career in the short-lived series.  The three young actors created a dynamic triangle throughout the series, establishing a highly entertaining and nerve-wracking tension each episode.

Creating a teen-like atmosphere in Palm Springs, a city known for being host to the older generation, was very well done and the music selected for the show was absolutely fantastic.  Artists like Damien Rice, Joshua Radin, and Pepper, along with Amy Winehouse and Guster were featured, fitting each scene perfectly.

My favorite scene of the series, and arguably my favorite scene in television, took place in the first episode, where Johnny meets up with Greta outside of a cafe and the two get to know each other more through an interesting interrogation.  This scene elaborates more on who these two characters are and will also set up for intense back and forths between the two later on in the show.
Hidden Palms was a show that was doomed from the start due to its lack of marketing and promotion, miserable time slot, and terrible timing.  I believe that if the show was featured on a Tuesday, or even Thursday, it would have succeeded and created a second, even potentially third season due to the cliffhanger of an ending in the season/series finale.  There was so much more this show could have provided: more answers to the original mystery, how the characters would have fared in school, and the introduction of new characters/further development of existing, older characters.

It's an absolute shame that Hidden Palms never made it past eight episodes, but we can at least feel fortunate that the show was made in the first place and created a nice, albeit shallow, niche for itself in the CW family of shows.

Hidden Palms is up on Hulu.com and available to stream at anytime.
*Editor's note: As of this edit, August 28, 2015, Hidden Palms was removed from Hulu.*