It first needs to be pointed out that Emmure is one of, if not, the most polarizing band in any form of metal today.  Some love the band and their sound, others despise them and actually wished lead singer Frankie Palmeri would die when he was electrocuted at a show overseas a couple years back.

I for one love the band and have ever since I heard the "2007 Most Brutal Album of the Year" Goodbye to the Gallows.  Below are my ten favorite Emmure songs and let me say, it was incredibly difficult to narrow this list down to only ten.

10. I Am Onslaught- Slave to the Game
In an album with heavy video game themes, "I Am Onslaught" is an ode to the X-Men villain of the same name.  Palmeri, an avid Street Fighter video game player and Marvel Comics lover, delivers a non-stop, brutal vocal throughout the track that is unrelenting.  Onslaught is the exact, perfect term to describe the chugging guitars and viciousness of the song that is one of the standouts from their 2012 release.

9. Don't Be One- Felony
What starts off with an aggressive drum beat turns into a beautifully sung intro from Track 11 of the band's 2011 release, Felony.  After Frankie's initial singing bid, his vocals take on a dark and more comfortable role for Palmeri.  The song plays on the desperation of a heartbroken ex-lover that is begging for closure before he "walks into the light."  The most chilling line of the 2:56 track is the standalone lyric sung with a hypnotic delivery : "We never got to say goodbye."  One of Emmure's best "ballads", if you want to call it that.
8. Free Publicity- Eternal Enemies
Two years after their album, Slave to the Game, Emmure came back with a CD to take on its critics, Eternal Enemies.  The album is full of aggressive shot-taking songs, but none is better than track eight, "Free Publicity."  In 2:21, you get amped up immediately and the song does not allow you to just nod your head.  It's dirty, grimy and overall violent.  Frankie's vocals do not disappoint and his lyric, "Now I know better than to talk to someone who's so weak and spineless/Remember without me your life doesn't mean shit," gives goosebumps and that "OH DAMN!" moment.  Filled with breakdowns and piss and vinegar, "Free Publicity" establishes Emmure as a band not to take shots against anymore.
7. Looking A Gifthorse in the Mouth- A Complete Guide to Needlework
Way before Emmure focused on bass destroying breakdowns and was more finely tuned, "Looking a Gifthorse in the Mouth" is the standout track that indicated how much potential Emmure had in 2006.  The vocals are raspy and the production quality is not up to par, but as their first EP, it completely delivered and made the metal world recognize.  More of an epic in terms of tempo change and story, Emmure delivers a completely interesting song that has not been duplicated since in their recent works.  Don't get me wrong, it's still filled with breakdowns, screams/growls, and angry lyrics; it's just more raw.  "You are the memory that just needs to fade," is the standout lyric, but this song will never do that in my memory.

6. False Love in Real Life- The Respect Issue
Following up their success in 2007 with Goodbye to the Gallows, Emmure returned with a more dirty and "real life" approach in The Respect Issue.  "False Love in Real Life" takes on a bit of a schizophrenic approach as the the way the vocals are produced, one lyric will be heard fully in the left ear and vice versa in alternating lines.  A song about anger directed towards an ex-lover was common theme in the late '00's for Emmure and very few do it better than this spiteful jam.  When Frankie delivers the lines, "You take my money, but I take your time/All I wanted to do was stop, think back and rewind/All I wanted was a memory, so you can savor the moment/Thank you, you fucking whore" in rapid delivery followed by one of their best breakdowns of all-time, I dare anyone not to get amped up by that.
5. Last Words to Rose- Speaker of the Dead 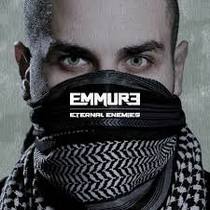 Playing off of the video game theme once more, "Last Words to Rose" is a softer jam that depicts a harmful relationship; one that is not good for either involved.  When an ex of mine and I would listen to this, we would laugh at the line, "This is Shadaloo!" because we had no idea what it meant and thought it was a silly line, but after doing some research, it completely fits the song.  What's sadder is that the message rang true several months later.  Point being, some things are better if they don't happen.  Thankfully, this song did happen and ranks fifth in my top ten.

4. A Gift, A Curse- Eternal Enemies
The second of two Eternal Enemies tracks, "A Gift, A Curse" is a well-rounded jam that highlights everything Emmure does well.  Engaging riffs, phenomenal vocal delivery, lyrics that strike a chord, and is a song that delivers with an amazing breakdown midway through the song.  The video is by far the most visually stunning Emmure has ever done and should be checked out on YouTube immediately (after reading the rest of this piece of course).  Another song directed at its haters, Emmure comes to terms with who they are as a band and will not waver for anyone, nor accept petty sympathy from bandwagon fans.

3. 10 Signs You Should Leave- Goodbye to the Gallows
Arguably the song that put Emmure on the map, "10 Signs That You Should Leave" is as intense and violent as they come.  Frankie's vocals, more polished since the Needlework album, growls his anger and angst in what some would argue as a cathartic nature.  However, his venomous lyrics directed at a woman who scorned him are heartfelt and delivered with rage and animosity.  There is no clever riff or stellar bass line; this song is an assault of Emmure's best breakdowns.  "Over?  This isn't over til I say it's over!"  Alright, Frankie, we got two more songs to go; I heard you.  Kidding aside, that breakdown is one of Emmure's most memorable and quoted lines in their history. 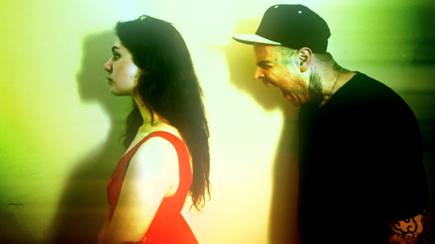 This image perfectly sums up the message of the song- Courtesy of planetmosh.com
2. MDMA- Slave to the Game
As was the case in my last post of Top 10 songs, the top two songs came down to a coin flip.  "MDMA" is, to me, the best "soft" song Emmure has and will ever do.  The song title, which is also known as "Molly", tells the story of a failed relationship and the attempt to move on.  The opening, dreamy riff combined with the screaming vocals is the perfect contrast for the scenario.  If you listen to it intently, the song is essentially a three minute breakdown and there is nothing wrong with that.

"'Let go!'
That's what you said,
But letting go was never an option;
I tried my fucking best."

Those three lines are the perfect summation of every failed romance that one always thinks back on and says, "what if."  Lyrically, the song speaks to me.  Visually, it is by far my favorite Emmure video.  The way the visual dances between a room full of friends and just the girl, the rose tattoo she has that could be linked to the "Last Words to Rose" song; it's absolutely genius.

This is an absolute masterpiece and that's as blunt as I can put it.
1. You Got A Henna Tattoo That Said 'Forever'- Goodbye to the Gallows
If I was asked, "What makes the perfect Emmure song?" I would simply say, "Listen to 'Henna'."  The abrasive opening, haunting singing vocal countered with dynamic screaming/growling range, bombastic bass line, grooving riff and memorable lyrics are just a few signature Emmure traits and they're all represented to the greatest degree in this song.

"Movie quotes and lyrics connecting us like constellations."  Hands down one of the best lyrics they've ever recorded.

The breakdown at the 2:09 moment of the song is and will always be the most underrated Emmure breakdown of all-time and in my opinion, their best ever.  It gives me goosebumps even after hearing it hundreds of times.  The song, while clocking in at 3:23 absolutely flies by and demands countless replays to accept its intricacies and subtleties as well as it's "in-your-face" dominating presence.

While it was tough to decide a decisive number one for this band, "You Got A Henna Tattoo That Said 'Forever'" squeaks by "MDMA" simply because it is the definition of Emmure.

I just wanted to conclude this list with another list of the "Best of the Rest."  Other songs that were highly considered, however, did not make the list.


I'm sure I could go on and right there, is another Top 10, honestly.  Well, nine, but you know what I mean.