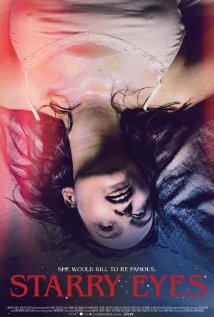 What would you do for fame?  Would you break free from your insecurities?  Would you partake in self-abuse to show your commitment to the part?  Or would you simply sell your soul?

In ﻿Starry Eyes﻿, a 2014 soon to be cult horror classic, Sarah (Alexandra Essoe) is an aspiring actress looking to become the first from her crew of friends to make an impression in the film world.  Working at a lowly local restaurant, Sarah believes she is destined for stardom and will do whatever it takes to make her name shine bright.

After proceeding to have a sub-par audition for a horror film that Sarah believes will break her career wide open, she takes out her frustrations on herself in a bathroom stall.  The ferocity with which she attacks herself is unsettling.  As she composes herself and steps outside of the stall, the casting director checks in on Sarah and sees a special side to the young, naive actress.

Receiving callbacks and follow-up auditions with increasingly more unique requests, Sarah begins to spiral into a personal downfall as she casts aside her struggling friends, quits her job, and watches her health wither away rapidly.
The final half hour is a pulse pounding ride with many twists and turns that will leave you breathless.  Sarah reaches rock bottom and must make some startling decisions in order to see her dreams fulfilled, but more importantly, to regain her physical and mental health.

Co-writers and directors Kevin Kolsch and Dennis Widmyer pair up once again to provide a chilling and unnerving tale about one's obsession with fame.  Their previous work included the feature film Absence six years ago.

Without question, Essoe steals the show and delivers one of the best horror film performances in recent memory.  Her range is dynamic and her facial expressions are what engage you as a viewer.  Seeing her wide-eyed and hopeful in the beginning of the film and the deterioration of her mental state is hard to watch, yet engrossing.  She is the conductor of the emotional rollercoaster you will go on when observing this demented view on how show business is conducted.

Starry Eyes is a film that will last with you quite a while after the end credits scroll on screen.  This is not a paranormal film.  This is not a slasher.  This is an ambitious film that does require a bit of thinking and discussion afterwards.