Not Waving, But Drowning 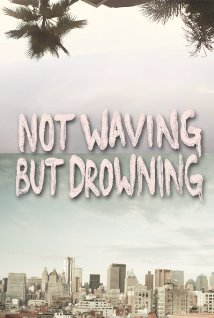 Photo courtesy of IMDb.com
The story of freedom and isolation will never get old and in the film Not Waving, But Drowning, it is a refreshingly genuine tale of what the real world can be.

Lifelong best friends Adele (Vanessa Ray) and Sara (Megan Guinan) are ready to leave their small Florida hometown and move up the coast to the Big Apple, New York City.  Adele is more of the risk taker, the enabler while Sara is more cautions and grounded.  After a horrific accident on a freeway inadvertently caused by Sara's father, she decides that it may be best to stay home and take care of the family.  Adele, outraged by the decision, storms off and finds herself the next day wandering the busy streets of New York City, looking lost as can be.

Throughout the film, the two girls find their respective places and themselves in Adele's self-proclaimed, "Revolution Summer."  Sara takes on a job as an attendant at a nursing home where she befriends the eccentric Sylvia (Lynn Cohen).  The two form a friendship over time and Sylvia becomes a bit of a life coach for the still naive and impressionable Sara.  Adele, feeling so hopeful for a new and better start, faces the stark reality that not everything in life comes easy.  Her roommates abandon her on a daily basis and her new acquaintance, Kim (Isabelle McNally) is not all she seems to be.  She also takes on a job as a janitor for the graveyard shift where she meets geeky, but lovable nice guy Adam (Adam Driver).

Photo courtesy of Google
Not Waving, But Drowning, also the title of a Stevie Smith poem, is a film about exploration physically, mentally, and emotionally.  As the two best friends are separated by states, their evolution as women is a complete departure of their former selves.  The wild child Adele learns to take responsibility and has to decide when there is a boundary to adhere to.  Sara, on the other hand, becomes more free and lets loose of her preppy behaviors.  She starts her revolution.

The title could be taken literally, but the film, and its title more or less, is about being an outcast and how if there could just be one voice or set of eyes to hear or see that you are struggling, it would make all the difference in the world.  Sara says it best towards the end of the film as she finally visits a emotionally drained Adele when she proclaims, "People put too much emphasis on escaping," to which Adele sadly admits, "You're right."

It is a film about discovery and how it is not always an easy sea to navigate.  There are plenty of waves to crash down upon you, many predators lying in the dark, and deep recesses of our minds that we may never fully understand or comprehend.  The two girls served as polar opposites of one another, however, their friendship worked because they complimented one another so much.  As time progresses, there may be a devolution, an erosion, in a bond like that.  Adele and Sara are a Jessica and Angela, they are a Toni and Colleen; they represent every friendship that has been tried and tested throughout the history of time, does not matter the name because everyone can relate to their plight.

Not Waving, But Drowning is a perfect metaphor and was excellently directed by Devyn Waitt, who also wrote the film.  The choice of setting, lighting and soundtrack was impeccable and the story was intriguing throughout.  The final scene leaves so much to be desired, that it is a bittersweet part of the film.  Aside from that selfish point, the film is highly entertaining, funny at times, and effective.  Truly a film that will leave you thinking at the end of it.