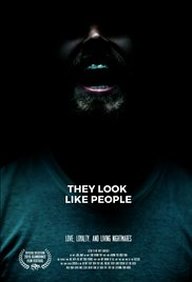 Perry Blackshear comes out of the gate swinging with his debut feature film, They Look Like People.  The film, which could be classified as a psychological horror/thriller revolves around two friends and an oncoming war between them and us.

Wyatt (MacLeod Andrews) returns to New York and reconnects with his best friend of many years, Christian (Evan Dumouchel) outside of his job.  After his broken off engagement, Wyatt is struggling to move on and cope with the voices he's been hearing in his head.  Christian offers to put Wyatt up for as long as he needs to get on his feet again.

Christian, on the other hand, is attempting to break free from his previous persona; a man who was too timid to take any risks in his life.  Mara (Margaret Ying Drake) is the object of Christian's affection at his workplace, but also has a unique tie to Wyatt.

As the characters begin to interact with one another, it is apparent there is something odd happening around the three.  Wyatt receives ominous phone calls in the middle of the night, sees faceless figures sleeping next to him and is haunted by terrifying visions.

While the oncoming "war" approaches, Wyatt begins to create a bunker in Christian's basement, a safe place from the encroaching danger.  Christian, a bit skeptical of Wyatt's odd behavior, believes in his friend begrudgingly as the two bond together to ward off the evil.

Or so we're led to believe.
The film does an exceptional job of creating an almost unbearable tension.  The constant static of buzzing bees when danger is near is cringeworthy and makes you pay attention to every frame.  One of the truest highlights of this film is the amazing cinematography.  The choices made for each shot were spot on.  I can't applaud the lighting as much as I want to for the sake that I don't know if I have enough words to do so.  Spectacular, especially for this type of film.

Andrews and Dumouchel have a great chemistry with one another on-screen and Drake's performance is outstanding.  That takes nothing away from the aforementioned male leads, who I believe also did an exceptional job.  Andrews, to me, stood out as the MVP.  His facial expressions along with great timing and tone are incredible to view.

The one disappointment I would say with this 80 minute film is that the ending fell a bit flat to me.  Personal gripe, but one that needs to be pointed out.  The build up is so tremendous and gets you on the edge of your seat, but when the end credits roll, you sink back into your chair/couch.  Again, it's not horrible, but not the payoff I was expecting.

Regardless, They Look Like People is an incredible addition to the psychological horror/thriller category.  The pacing may be slower than what most would like, but it does the trick in establishing the story.  The characters are engaging and well acted.  Once again, the cinematography cannot get enough kudos from me.  Truly remarkable.

A great film that will have you questioning everything and to me, that's what a great film should do.