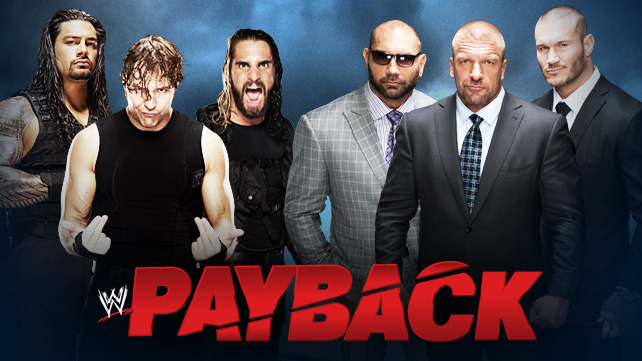 With Payback underway tomorrow, I offer my views and opinions on a PPV that last year could arguably have been the best WWE produced in 2013.

The pre-show features yet another installment in the rivalry that never ends.  Hornswoggle and Torito have continued their feud to its ultimate breaking point.  Last week on Raw, Torito's tail was ripped off and required immediate surgery by Los Matadores.  Fortunately for us fans, he will be all stitched up and ready to compete tomorrow.

Most sarcasm aside, after Torito's "injury", the masked bull will come away victorious in a comedic, yet athletic match to kick off the show and shave Hornswoggle's wild, 3MB inspired hair.

Paige (C) vs. Alicia Fox for the Diva's Championship

Alicia Fox had been the definition of a Diva jobber for the last two years.  After a recent loss to Paige on an edition of Raw, she lost her mind by destroying the announcer's table and stealing JBL's prized cowboy hat.  As the weeks have gone on, the leggy diva has had impressive matches with Paige and other newcomer, Emma.  Fox, win or lose, has had some interesting post match celebrations/tantrums.

Where the WWE will go with Fox's crazy side is still up in the air, but I feel that the newcomer cannot lose the title this early in her first reign.  Paige will lock in the Scorpion Crosslock to retain the title.  It will be interesting to see how nuts Alicia will go after this defeat.

Sheamus (C) vs. Cesaro for the US Championship

Sheamus was victorious in the 20 man battle royal held on a recent edition of Raw by Brogue Kicking then champion Dean Ambrose of the Shield and then tossing him unceremoniously over the top rope.  Since then, Sheamus has had some battles with Alberto Del Rio and tried to show his respect towards Cesaro by offering his hand.  Cesaro, the most recent Paul Heyman Guy, has shown his disrespect by not shaking Sheamus' hand and/or humiliating the Irishman any chance he gets.

Cesaro, the King of Swing, is an incredible force in the ring.  His skill set is unmatched, his strength is untouchable and his overall combination of personality, ability and confidence is off the charts.  Having Paul Heyman as his manager allows him to have a mouthpiece that will easily turn the pro-Cesaro crowd into a, pun intended, Neutral crowd.

Two big, hard hitting competitors fighting for a title that, other than the WWE World Heavyweight Championship, has a bit of prestige to it.  I truly feel that Cesaro is a "can't-go-wrong" talent and deserves to hold a belt, but I don't believe that Payback will be the venue where he does so.

Winner: Sheamus retains the US Championship

I'm afraid I have some bad news for Mr. Monday Night.  With the crowd firmly behind the newly appointed Intercontinental Champion, Bad News Barrett has finally found a gimmick that is working...for now.  His cockiness and ego is at an all-time high, along with his performances.  After having solid matches against the likes of Big E, Sheamus, and others, BNB will look to etch a memorable run with the IC belt.

Rob Van Dam is a Hall of Famer who has come back several times to produce intriguing match-ups and bring a shot of excitement to the audience with his high-flying arsenal of maneuvers.  RVD will once again put on a solid match filled with kicks and splashes and dives, but his Five Star Frogsplash may become a bellyflop once BNB drills him with the Bullhammer Elbow for the one-two-three.

Bray Wyatt is not Randy Orton, however.  His eyes are crazier, his words are even more insane than his eyes.  We've heard him countless times yell, "I am a God!" and I believe to a degree that he believes it as well.  His size and raw power, balanced with his unbelievable speed and athleticism for the big man are a combination that Cena just barely escaped at the Show of Shows in April.  With Luke Harper and Erick Rowan on the outside, the odds are clearly in Wyatt's favor.

I expect this match to be ugly.  Chairs, tables, stairs; hell, we may even seen the rocking chair and lantern used in this match.  These two have built an intense rivalry that has every member of the WWE Universe intrigued.  I feel that Bray Wyatt comes up on the right side of this match and sends a shock down the Cenation's collective spine.  In order for Wyatt to go over as a dominant force and heel, what better way would there be then to put down the face of the WWE.

Evolution vs. The Shield in a No Holds Barred, Elimination Match

I can't express how excited I am for this rematch.  Extreme Rules was made by the first match and now with Payback, these two teams are fighting for the ultimate bragging rights.  The Shield are looking to eliminate the three "washed up" members of Evolution from their yard.  Evolution, led by Triple H, are looking to prove that they can still hang and that they can adapt rather than perish.

The no holds barred stipulation is added for the fact that it can add to the ultimate chaos that is expected.  I expect Dean Ambrose to thrive fully in this environment.  After his days at CZW, I don't believe there is any scenario involving weapons in the WWE that the Lunatic Fringe can't handle.

With the elimination stipulation, Evolution, including Randy Orton, has had immeasurable success over the years.  The 31-time world champions are as smart as they come inside and out of the squared circle and I expect them to have a numbers advantage throughout the match, even though The Shield are the most recent masters of such strategy.

In the end, this will be the match that steals the show.  If this is anything other than the main event, then I have no clue how/why WWE booked it anytime earlier in the show.  It is the match with the most build-up and most intriguing possibilities.  In my older posts, one can see my favoritism towards the Shield and Dean Ambrose.

I believe that in the end, Reigns will rule supreme, but the true star of the match will be Ambrose before his inevitable elimination.  Seth Rollins will have another solid and strong outing as well.  Evolution will have a two-on-one advantage over Reigns with Triple H leading the charge, but ultimately, and literally, falling at the "hand" of Roman Reigns with an intense Superman Punch/Spear combo.

I believe in The Shield.