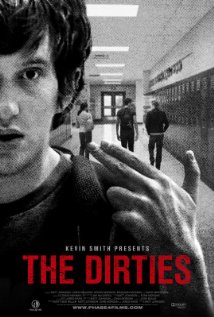 The Dirties is going to be a cult classic film within the next several years.  The film revolves around two filmmakers, Owen and Matt and their student-film, The Dirties, which revolves around the bullies in their school and how they want to eliminate them.

The film is shot in the same vain of Project X, Paranormal Activity, and Cloverfield, where one person is holding the camera and filming what is going on around them.  You could call it the faux-documentary style.

Owen and Matt are avid movie lovers and creators, but are sick and tired of being bullied.  Over the course of the film, Owen and Matt's vision of their student-film changes drastically.  Owen realizes it was just a project and wants to live on his high school days by doing normal activities like going to class, playing guitar and flirting with the most beautiful girl in the school, Krissy H.

Matt, on the other hand, blurs the line between film and reality.  He sets in motion a plan to take out the Dirties, for real.  He, along with Owen and his cousin, go to a shooting range and practice their shots.  Matt also gets blueprints of his high school and takes pictures of the people he plans on taking out.

Throughout the film, there is plenty of comedy, despite the imminent conclusion of the film.  Owen and Matt have a great friendship and their chemistry on screen is hard to deny.  The realism on the screen is bone chilling and one can easily see this as a snuff film, to a degree.

The director and writer of the film, Matt Johnson, also plays the "psychopath" in the film.  The choice to use the actors real names in the film was brilliant to enhance the realism.

Certainly the theme of the film is not popular and will be controversial to many people.  The fact that Columbine is imitated several times throughout the film, along with other themes synonymous with serial killers (Catcher in the Rye), makes it more harrowing and chilling.

The Dirties is a must see on Netflix and is a highly underrated film.