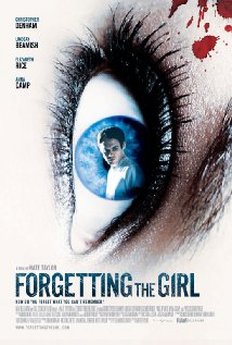 Photo courtesy of IMDb.com
Before you get the idea that Forgetting the Girl is a rom-com of the indie variety where the protagonist goes through the ups and downs about forgetting a girl he loves, stop right there.  It is quite the opposite.

In this 2012 film released by Full Stealth Films and directed by Nate Taylor, photographer Kevin Wolfe (Christopher Denham) does not have the best luck with women.  In fact, during his photo shoots with the women, he asks all of them out on a date at one point or another.  His yes-to-no ratio is about 1-to-100, however, he keeps trying.  Those that he does end up going on a date with ultimately end the "relationship" rather soon and Kevin is forced to forget the woman in one fashion or another.  Some of his methods include watching independent films, going to Coney Island, and just sleeping through the day.  Kevin, needless to say, has had some rough times.

During one shoot, he meets a woman named Beth and his life is changed.  He develops a connection with Beth and the two have a wonderful relationship until Kevin attempts to move in too quickly.  Beth's denial of his advances sets off a horrific chain of events for Kevin and his obsessed, depressed assistant Jamie.  Kevin's dark past cannot escape him as he sets in motion a horrible series of unfortunate circumstances.  His guilt is overwhelming, forcing him to come up with some depraved ways to forget the girl.

Forgetting the Girl is a beautifully directed psychological horror film that pins you to your seat throughout its 85 minute run-time and will leave you wanting more after its shocking conclusion.