Ligeia- Your Ghost Is A Gift 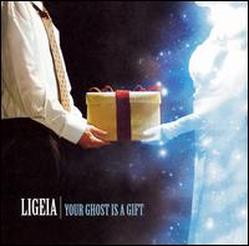 Ligeia, a metalcore band from Boston, Massachusetts, came out swinging with their heavy and brutal debut album, Your Ghost Is A Gift.  The 11-track CD is layered with intense lyrics and vocals, detailed guitar riffs and stellar drumming.

Released in 2006, Ligeia, named after the Edgar Allan Poe story, made themselves a player in the scene, which at the time was dominated by bands like Killswitch Engage, Unearth, As I Lay Dying, God Forbid, and so many others.  Keith Holuk's unique screaming/growling combined with his surprisingly good clean vocals were the standout performance on the LP.

Tracks like "Beyond a Doubt", "I'm Sorry You're Ugly" and "Makin' Love To A Murderer" are fast-paced, in-your-face songs that don't let up for one moment.  To contrast that, songs like "Dead Man's Bride", "Heart Attack", and "Wishing Wells" build up the intensity and weave a story that one can follow relatively easily.

Arguably the best two songs on the CD run together.  The first track is "The Blackout", which is a more melodic, epic piece of music from the brash newcomers, at that time.  Once the song wraps up, there is a beautifully constructed interlude that leads right into the hidden gem of the CD, "Household Stereotypes."  The song is packed with gut-wrenching emotion, volatile breakdowns and a superb mixture of Holuk's vocal stylings.
The band followed up their exceptional debut with Bad News, which was a bit of a departure from what made Ligeia standout in the first place.  That release was more along the lines of an Every Time I Die record.  Not saying it was bad, but it was not as good as Your Ghost Is A Gift.

Regardless of releases and the style of music Ligeia evolved, or in some instances, devolved into,Your Ghost Is A Gift  was a refreshing debut that was meant to create the next superstars in the metalcore scene.  Unfortunately, due to issues within the band and its members, Ligeia never lived up to their truest potential.  If one was a fan of this band, they remained loyal and that was all because of their fantastic live shows and near flawless debut.