Emmure- Goodbye to the Gallows 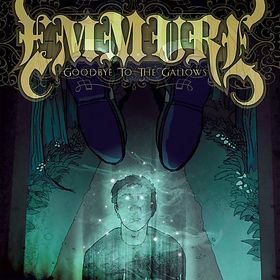 In 2007, New York-Connecticut deathcore band Emmure released what was deemed the "Most Brutal Album" of the year with their debut album Goodbye to the Gallows.  The CD was filled with violent breakdowns, angry and vicious attacking lyrics, and hit singles like "10 Signs You Should Leave," "When Keeping It Real Goes Wrong," and "You Got A Henna Tattoo That Said 'Forever'."

Vocalist Frankie Palmeri made his presence be known to the metal world with his deep growls, high, scratchy screams and sinister speaking voice.  Layer the vocals on top of one another and you have one incredible dynamic vocal performance.  His lyrics are heartfelt and the delivery of said lyrics is just as engaging.  You feel every ounce of pain, hatred, betrayal, and sadness with every single song.

Musically speaking, this is the most diverse of Emmure's catalog, but are laced with heart-pounding, foot-stomping, fist-flying breakdowns that will get every single person in the pit thrashing and moshing around like they've finally been freed from a cage.  The pure energy from this release is off the charts and is unrelenting.  There is only but a moment where one can finally breathe and that is the musical interlude named after Robert De Niro's character in Taxi Driver, "Travis Bickle."

The classic track on this CD, for me, is "You Got A Henna Tattoo That Said 'Forever'."  It is ripe with brutal rhythms, lyrics are emotionally charged and delivered and musically, it sets itself apart from the other heavier songs with its melodic presence.  The build up from the end of "Rusted Over Wet Dreams" and those haunting notes at the beginning of the track build up anticipation and after the first verse, I am put into a completely different mind frame.  It grabs a hold of me and does not let up for its 3:32 run time.  The quote "Movie quotes and lyrics still connecting us like constellations" is one of my favorite lines of all-time.  Period.

One very underrated song from the album is "Sleeping Princess in Devil's Castle".  It is the most melodic song on the CD and is a refreshing break from the pure brutality and hatred evoked throughout the other eight tracks.  The track has a certain ease to it.  What it does best, however, is proves how diverse and talented the band is.  The combination of the guest vocals from Karl Schubach and Tyler Guida along with Palmeri make this song a hidden gem.

Goodbye to the Gallows, if you ask most Emmure fans, will be the first album they think of when you ask them what CD of Emmure's they think is the best.  It was the one that garnered the most attention and certainly one that put them on the map.  Throughout the years, Emmure has evolved, sometimes for the better and sometimes it has been a step backwards, but their trademark breakdowns, vocals, and melodic parts have kept them relevant and giants in the genre.