What a Royal Rumble!  I will first say that this was by far the best from top to bottom that the WWE has provided us fans in quite a while.  All four undercard matches delivered and the Rumble was filled with intensity, drama, some predictability and the best non-surprising surprise to ever happen, in my humble opinion.  All of this and much more covered in later sections.

Before we transition, I will say that I did go a perfect 5-for-5 on the PPV, which can be seen in my previous post by clicking here.

​Now, let's get to the matches: 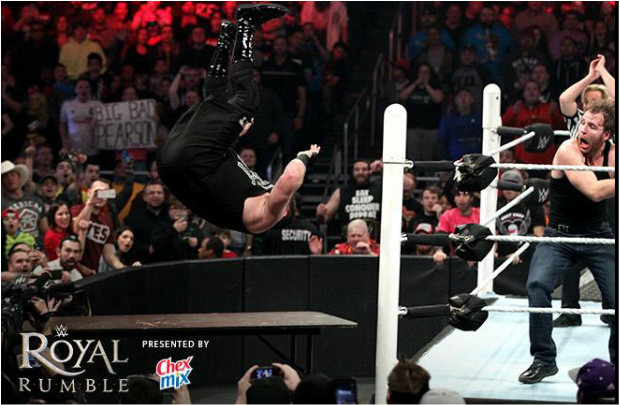 Photo courtesy of WWE.com
Talk about kicking off a PPV with a bang, and many of them.  The opening contest saw the defending champion, "The Lunatic Fringe" Dean Ambrose face off against Orlando crowd favorite, Kevin Owens in a hellacious bout.

The fight started off full throttle with the two combatants trading fists of fury.  The ebbs and flows the match were perfectly orchestrated as Ambrose took a decisive advantage for the first third of the match, followed by Owens dominating Ambrose until the final act.  Many chairs were destroyed, a kendo stick snapped in half and the barrier protecting poor Lillian Garcia turned to rubble by an Owens' cannonball roll.

The final third of the match saw the two wounded warriors trade high spots through tables and climactic count break-ups.  It was Ambrose who had the wherewithal to see Owens perched up on the top rope, presumably to moonsault through Ambrose and a group of chairs, and push him through the double-stacked tables to the outside.

I thought this match was the perfect way to kick off the Royal Rumble with a hot crowd, very anticipatory of a good event.  One of the first sequences with Owens sent over the announce table and deliberately taking out Michael Cole was absolutely hysterical.  He pie-faced him, broke his glasses, and continuously kept dragging down the long-term play-by-play commentator.

Owens trash talking is always a highlight in any of his matches and he truly is a heel in current day professional wrestling where the term "heel" and "babyface" can be blurred.  Ambrose, my personal favorite male performer on the roster, plays his role to a tee.  The man who never gives up and will do anything and everything for his goals has capitalized on his recent opportunities and I believe will continue to flourish up to and through Wrestlemania 32.

The match was physical, violent, and unpredictable.  I truly thought at many times Owens was going to come away victorious, but I am glad that Ambrose pulled off the victory.  It will be nice to see a fighting Intercontinental Champion for a long run to restore the prestige of the belt.

With a shallow tag team pool, we witnessed the New Day defend their--in Xavier Woods' delivery--WWE Tag Team Championships against their arch rivals, the two-time Slammy Award winning tag team, The Usos.  The New Day entered the ring first, joined by Francesca 2, Xavier's newest trombone.  The promo on the way to the ring was about how 2016 will be a "Golden Year" for the trio.  Always entertaining, the Orlando crowd was in love with Kofi Kingston, Big E, and Woods.

When the Usos arrived and the match got underway, it was a great back and forth battle between the teams that know each other so well.  In a way formulaic for the teams, the finish was excellent as Big E hit a Big Ending on the flying Jey Uso to retain the gold.

It's tough to give this a fantastic rating, however, the five men worked their tales off.  It was exciting, yet filled with a lot of similar spots that we've seen in previous matches between the duos.  The crowd was lulling a bit, however, the final two minutes had them off of their feet.  I thought it flowed well and the placement of the match was perfect.  I enjoy these matches, but am hoping for a new rival for The New Day very soon.

I'm going to just jump into the review of this match.  I am personally sick of seeing these two battle and am glad that the match ended the way that it did with Kalisto recapturing the United States Title.  That being said, I am fully aware that we are bound to see to a few more match-ups between the two.  There were some interesting spots, but also very noticeable, bad botches.  The ending moments of the match were tough to watch, but thankfully Alberto Del Rio and Kalisto were able to pull out an entertaining match.  Lastly, as a side note, I loved Kalisto's ring gear tonight, especially the red/silver/black color scheme.  Great stuff. 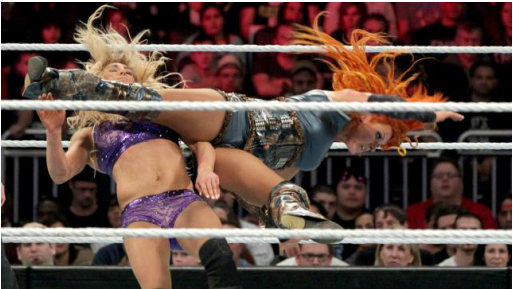 Photo courtesy of WWE.com
The match before the Royal Rumble is always a tough spot to be in, but Becky Lynch and Charlotte put on a solid women's wrestling match to energize the crowd before the main event.  Technically sound with great drama and interaction with Ric Flair, the divas held up their own on the card and had the crowd into it from start to finish.

As Becky had Charlotte in the Disarmher looking to win her first WWE title, Poppa Flair threw his sports coat on her face, distracting her and forcing her to let go of the hold.  Charlotte would take advantage by hitting Becky with her second spear of the night and putting an end to the Irish Lass Kicker's latest opportunity.

I start my review with my favorite part of the match and where I ended in the recap.

SASHA FREAKING BANKS IS BACK!

Before the Flair's left the ring, the Boss's music played the Orlando erupted; arguably the biggest pop of the night.  Sasha, without saying a word to Charlotte, kicked the fallen Lynch out of the ring, declaring it was "my time now."  She then briefly revived the BFF faction that she, Charlotte, and Summer Rae were a part of in NXT with their signature handshake.  As Charlotte was about to leave the ring, Banks ran over and hit her with a Backstabber followed by the Bank Statement.  Flair never tapped, but the message was sent.  Sasha is next in line for that title and I can not be more thrilled.

As for Charlotte and Becky, I really enjoyed the match.  I thought it was clean and crisp.  Each Diva got their signature moves in and left it open for another match between the two sometime down the road.  I love Becky Lynch and how she is finally being embraced by the fans.  Did anyone else find it hysterical that Flair was once again a "kiss stealin'" man when he planted one on Becky?  Classic Naitch.  I believe that she will one day be Diva's Champion and a great one.  Charlotte is just dominate.  Wonderful performer and I love the heel tendencies she was showing by yelling at her father at the end of the match.  Interesting, intricate stuff.

Wrestlemania storylines are beginning to formulate and it's exciting.  Roman Reigns unsuccessfully defended his WWE World Heavyweight Title and lost it to WWE's COO and returning HHH.  That being said, the match itself was awesome.  One of my favorite Rumbles ever to be honest.  What was my shining moment?  Pardon my French, but

I don't think I need to say much more, but what a reaction The Phenomenal One got.  Truly, in my opinion, the best in the world and arguably the best ever, Styles survived an impressive 28 minutes before being eliminated by Kevin Owens.  Smart move by WWE to have another "indie" guy eliminate Styles than, let's say, Ryback or Roman Reigns; basically better than if a WWE "guy" were to get rid of him.  Sami Zayn's return was awesome and the fact that they picked up the Zayn/Owens rivalry again was fantastic.  Triple H's return was all but guaranteed, but I enjoyed it and the final two being Ambrose and HHH was exciting for me, along with many other fans
Now, a lot of fans are pissed that Triple H is champion, but it was the only call to make and here's why:Other Points for Rumble Match:
​4.75/5

As mentioned above, one of my favorite Rumble's from top to bottom.  Each match was entertaining for a cornucopia of reasons.  The Diva's shined, Ambrose/Owens lived up to expectations, and the Rumble was balanced perfectly.  Plus, AJ STYLES!  I really can't get over it.

Overall, I give the Rumble a solid 4.5.  Great showing and now I'm even more excited about WWE than I have been for the past 20 years.