The Saddest Landscape- All is Apologized For.  All is Forgiven. 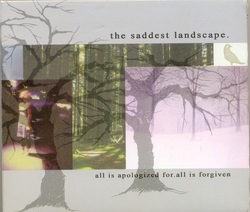 All is Apologized For.  All is Forgiven is a compilation album of post-hardcore/screamo/whatever-genre-you-want-to-label-them band, The Saddest Landscape.  The quartet from New York are known for their energetic live shows, fast paced riffs mixed with phenomenally written melodic parts, and the indescribably painful, yet fitting lyrics that cover themes such as growing up, growing apart, and most importantly, the true nature of love.

The album has 23 tracks, consisting of songs from their previous releases such as The Sound of The Spectacle, Lift Your Burdens High For This Is Where We Cross, Cover Your Heart, and A Promise Was Made...  Most notably on this compilation are the songs "He Died Among Dreams," "The Temptation That Is You," and "The Sixth Golden Ticket."  These three songs, among the countless amazing anthems on the CD, stand out due to their raw emotion and hectic sounding song construction.  The band members are masterful of perfecting that sound where it seems to the listener that the group has no direction with their music and it sounds like a jam band, however, the music reflects the emotion.

Fast paced guitars and percussion represent the chaos and the endless thoughts that can run in one's head during an emotional tailspin.  Once the pace slows down, the calm in the water and the moment to breathe are represented.  Psychologically, The Saddest Landscape, whether it is intentional or not, create such an atmosphere within their songs that you as a listener ride that proverbial emotional rollercoaster in every song.

Simply put, The Saddest Landscape's initial catalog of songs is greatly presented in All is Apologized For.  All is Forgiven and is a must listen/have if you are a fan of any genre the band is put into.