The Modern Day Saint- ...And Tomorrow We Will Have Nothing 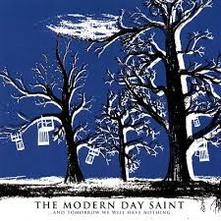 It was eight years ago when I attended my first big music festival.  In the fall of 2006, the Sherman Theater in Stroudsburg, Pennsylvania held an event called "Waidestock" which was essentially a mini-version of Warped Tour filled with underground bands, or bands that had yet to break out in the Tri-State Area (New York, New Jersey, Pennsylvania).  It was an all day event that had three different venues and that was filled with over 30 bands.  It was an exciting atmosphere and just to give a bit of history about the event, Motionless in White was the second band to play that day.

A few years later, almost everyone I had known was finally realizing how good of a band they were.  Waidestock was more or less a proving ground for these acts and Motionless In White took full advantage of the opportunity.

After seeing several acts and wandering the merch tables, I came across this band from Boston, Massachusetts called The Modern Day Saint.  Their merch stand was filled with items like pins, posters, and copies of their newer LP, ...And Tomorrow We Will Have Nothing.  For a staggering $15, I received the album, a poster, and a copy of their split EP with a defunct New Jersey band, Sonny.  Quite the bargain if I do say so myself.
When I returned home, I popped in the CD and instantly fell in love with the opening riff on the opening track, "Always Keep Your Head Up."  It was intricate and soothing.  When the vocals came in and the music changed, it was a different experience.  The vocals were raw and not necessarily great, but they believed in what they were singing.  The lyrics were interesting in concept and deeper than most of the music I was listening to at the time.

It was exceptional, and it wasn't just the first track, it was all of them.

Running down the track list, "Solutions" was a slower song that has one of the more visual opening lines that I've ever heard.  The underlying screams and layered vocals make it a standout track from the 11 song release.
The true hit off of this CD for me is the track "On My Stereo".  It's folky opening with just an electric guitar and vocals is memorable and catchy with a soft drumbeat in the background to keep the tempo.  When people talk about a "cruising around" song, there is no better example than this track.
From track 1-11, The Modern Day Saint created an engaging experience that was more matured than their previous EP release with Sonny.  Their songwriting consisted of many styles, but never strayed away from being authentic and emotional.  Whether it was a folky song or a down and dirty punk-rock track or a simple pop song, The Modern Day Saint was one of the best "undiscovered" bands I have ever come across, even eight years later.

While the CD was released in 2006, it was a horrible accident that happened in 2004 that affected the band in a way that is near impossible to describe.  Their original lead singer, Daniel Lang-Gunn, had suffered anoxic brain damage following his collapse on stage due to cardiac arrhythmia.  Adam DiMuzo had taken over the vocals after a year off and finished the record to honor their friend who had begun his rehabilitation.  Friends of the band, Via Audio, created a song called "The Modern Day Saint" to show their support and love for Lang-Gunn and the band's tough times.

It was after the album's release and some shows following that the band officially called it quits, but not before releasing an album that I will always hold close to my heart and one that has been played dozens of times over the years.  The songs in the piece are only a taste of what the band had to offer and what they could have continued to offer.  ...And Tomorrow We Will Have Nothing is truly a remarkable album, especially when you consider the events leading to its release and put it all into perspective.  The Modern Day Saint, in my mind, was a band that could have made a big impact in the scene in the upcoming years as they were hitting their stride as musicians and were still a young band.

At least with this album, tomorrow's will provide us with something to remember The Modern Day Saint by and enjoy what they did create during their short time as a band.