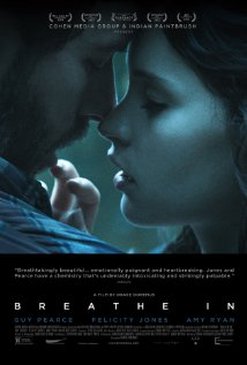 Keith is desperate to escape the boring routine of teaching and has been honing up his cello skills to attempt to make it on a traveling orchestra that would change his families fortunes.  His daughter Lauren, (MacKenzie Davis), is a champion swimmer and his wife, Megan (Amy Ryan) makes and sells cookie pots on the side, but is mostly "the family driver".

Sophie's introduction to the family and to American culture is an all too familiar scenario.  She is shy and distant from the family and classmates alike.  As she and Lauren tentatively develop a friendship, she also reveals to Keith in his class that she can play the piano; a skill he is most anxious to observe.  As she easily masters the ivory keys, Keith's interest in Sophie begins to mold into an unobtainable desire.

The relationship of Keith and Sophie is a very taboo relationship with an older, married man developing feelings for a younger student who is the same age as his daughter.  The interactions between the two start off as the casual morning greetings and teacher-student bond, but as Sophie's stay begins to wear on the family and create doubts, their bond is more of a personal nature; one where the two can confide in each other at a deeper level.  Sophie, however, is wise beyond her years and a telling scene from the film includes the aforementioned quote as the two share a beer in the empty Reynolds home in the middle of a rain storm.
Doremus and Jones have teamed up once before with the 2011 independent romantic drama, Like Crazy; a film which also saw Jones as a foreign exchange student.  The duo's chemistry in terms of character and development throughout the film is extraordinary and Jones' performance is easily the best in the film.
Guy Pearce and his role as Keith is one that is not brand new, but he does play the character extremely well.  Caught between his own selfish professional goals, personal desires, and familial responsibilities, Keith is never in the right for any of his choices.  He is a man who regrets his past and even, ever so briefly, regrets his current standing.

Relative newcomer MacKenzie Davis puts on a fine performance and leaves the viewer engaged with her on-screen story and her personal progression as an actress.

Overall, the film is very reminiscent of the 2012 film Nobody Walks starring John Krasinski and Olivia Thirlby, but that does not mean they are the same story.  While they are similar, Breathe In separates itself with a better script, acting, and story overall.

Breathe In is an exceptionally well done film filled with beautiful tracking shots, a dark, dreary setting that matches up with the tone of the film, and great performances by Jones, Pearce, and Ryan.  Doremus delivers once again with an exciting, engaging and overall emotional story.