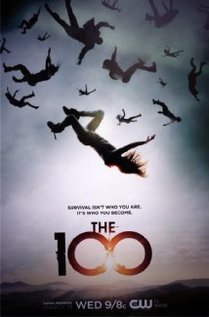 It is no secret that the CW Network offers some of the best teen oriented shows on television.  Such hits like The Vampire Diaries, Supernatural, and The Originals draw in countless viewers for the demographic.  Should I go on to mention that is the station that has produced superhero classic series Smallville and today's current smash Arrow or even The Flash?  How about the successful reboot of the 1980's series Beauty and the Beast?

Needless to say, CW has a stranglehold on the genre.

With one of the newest series to their impressive repertoire, The 100 offers a different story that this demographic has not seen before.

The series, based off of the novel written by Kass Morgan, tells the story of 100 juvenile delinquents sent to an uninhabited Earth to repopulate the planet that has been vacant for close to one hundred years due to a nuclear war.  The test subjects, for a lack of better terms, have been living on a space station with their families and a Chancellor that has been attempting to preserve life as best as possible.  With a dwindling oxygen supply and overcrowding on the station, it is imperative for the kids to survive on Earth or those left behind will die.
Clarke, the blonde haired dreamer, is out to redeem her father's death by leading the castaways to a successful repopulation.  Other crew members consist of Finn, the dark-haired playboy.  Wells, the Chancellor's son and Octavia, a beautiful, fiery brunette who was not even supposed to be born on the station.  While these four characters play a vital role, others like Bellamy, Octavia's older brother, Jasper, the ambitious and mysterious one and John Murphy, a rebel from the word "go" fill out an outstanding young cast of survivors.

What makes this show very interesting is that the kids have one half of the show while the adults on the station take up the other half.  Both stories deal with survival, but within different circumstances and settings, each with their own pitfalls.  There is a palpable tension with all parties pictured, evident good and bad storylines and ethical and moral lines being blurred.

For being a story geared towards a young adult audience, there are some very heavy themes such as abandonment, murder, suicide, betrayal, love and hate, angst, and many, many more.  The story is constructed well, however there are some missing elements and some details that could be further developed and elaborated on, but in due time, things will come full circle.

Lastly, it is easy to draw comparisons to LOST.  There are survivors looking to overcome their past in a different environment.  The friendships, rivalries, and loves that form put divides within the group and their survival is in jeopardy if they do not work together.  "Live together, die alone," remember?  Dr. Jack Shepherd was onto something.

All 13 episodes of Season One are currently available to stream on Netflix and Season Two* is currently running on the CW.

*Editor's note: As of this edit, August 28, 2015, season two has wrapped up on CW; still awaiting its release to Netflix.*