A concept that the Royal Rumble has been based upon since its inception, but never fully developed until this year.  Roman Reigns' signature phrase is not just a neat selling t-shirt, but it is the obstacle he has to overcome this Sunday night in Orlando if he plans to leave the WWE World Heavyweight Champion.  What makes this truly one versus all?  How about the fact that the Samoan has been selected as the No. 1 entrant in the Rumble?  Truly a match we have never seen as a WWE fan and one that has me more anticipatory than any other years. 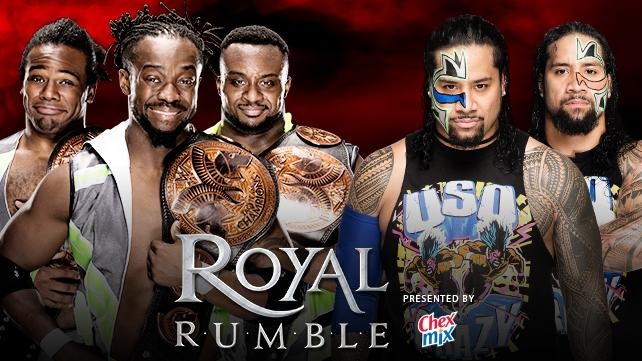 Photo courtesy of WWE.com
The tag team division has been revived, but only because of two teams.  The New Day and The Usos are said teams.

With the injuries to Cesaro and Tyson Kidd, Sin Cara, and Darren Young breaking up popular tag teams in the WWE, the division has been reduced back to two main threats for the belts.  The Usos, two-time Slammy Award winning Tag Team of the Year, are back in full swing with their performances becoming even more exciting than in previous years.  The duo of Jimmy and Jey Uso are arguably the most energetic performers on the roster and always provide excellent matches, no matter their opponent.

The New Day.  My god, what more can be said about the New Day?  They are truly the most entertaining act on the main roster and dare I say, in professional wrestling as a whole.  The trio of Kofi Kingston, Big E, and the multi-talented Xavier Woods have saved not only WWE television, the tag team division and the "E" in WWE, but they saved their careers which were floundering for a bit.  The two-time World Tag Team Champions enter Sunday night with all of the odds stacked against them.

The rivalry between the two speaks for itself and I don't expect a bad match out of these competitors who know each other so well.  With both teams trading victories in recent weeks in various contests, I still believe that the New Day is the best thing going in the business and should not lose the Tag Titles for quite some time. 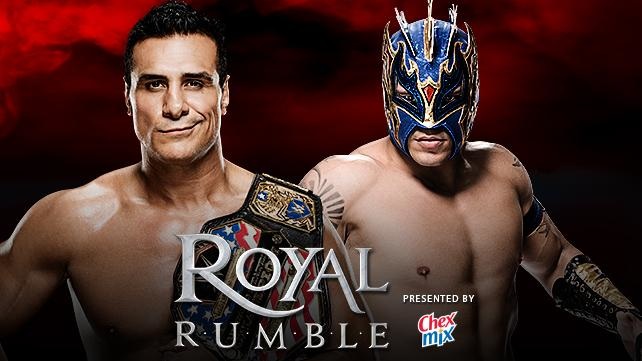 Photo courtesy of WWE.com
It's a cliche rivalry, but one that still will draw attention and emotion from the WWE Universe.  The recently returned Alberto Del Rio stunned the WWE Universe with his appearance and triumph over John Cena for the United States Championship at Survivor Series.  Del Rio, who recently had a phenomenal run on Lucha Underground, returned back to the WWE with a much more chiseled physique and determined attitude, alongside his fellow stablemates in the League of Nations.

With the unfortunate injury to his tag team partner, Kalisto has found success as a singles competitor.  Winner of the 2015 "OMG" Moment of the Year Slammy, Kalisto skyrocketed to the public eye with his daredevil attitude and incredible athleticism, which also led him to an upset that not many saw coming.
Unfortunately for Kalisto, he lost that title later on Smackdown as Alberto Del Rio, with the help of his friends, regained his coveted title.  After weeks of bullying and fighting uphill, I believe Kalisto is due come Sunday and will reign in a new lucha movement in the WWE.

Prediction: Kalisto wins the US Title from Alberto Del Rio 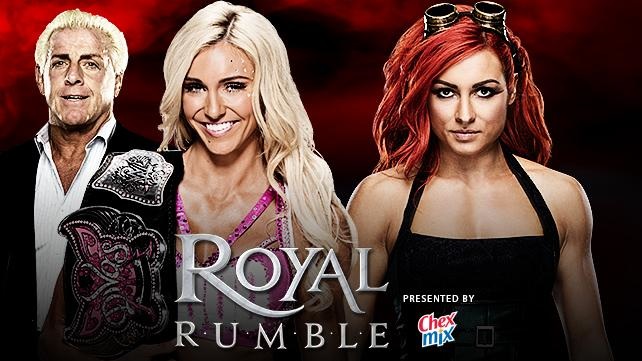 Photo courtesy of WWE.com
Former best friends who have now turned enemies, again, it is a storyline we have seen before.  The two standout NXT women's wrestlers, Charlotte and Becky Lynch are set to settle the score Sunday evening for the richest prize in women's wrestling.  After weeks of being betrayed and backstabbed, "The Irish Lass Kicker" has taken it upon herself to get the match that she rightfully deserves against the Nature Boy's "genetically superior" daughter.

In a contrast of styles, this match promises to be entertaining and highly competitive.  Charlotte has a more deliberate, hard-hitting flare, while Lynch is 100 MPH with constant movement and quick strikes.  The battle of submissions will be the biggest thing to look out for between these two.  The Figure-8 vs. The Disarmher.  In this contest, I believe the latter will succumb to the dirtiest players in the world. 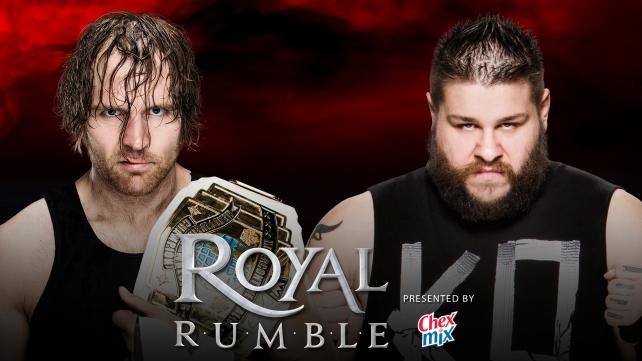 Photo courtesy of WWE.com
I'm going to go on record and say that this is Match of the Night and could possibly be in contention at the end of the year is the same category.  The Intercontinental Champion Dean Ambrose and the former champ Kevin Owens have had a tremendously built rivalry over the last several weeks filled with violence and vitriol both physically and through spoken word.  Ambrose captured the championship in a surprise win over the shunned 2015 Breakout Star of the Year nominee at the TLC pay-per-view and has continued his impressive role through multiple wins on Raw and Smackdown.  Owens, the Prizefighter, is looking to regain his title and further his legacy, but more provide for his family.

This match promises to be hard-hitting, violent, and at times painful to watch.  I fully expect these two superstars to go all out with the brutality and incredible move sets that they have to entertain the WWE Universe and keep them standing long after the final bell has run. 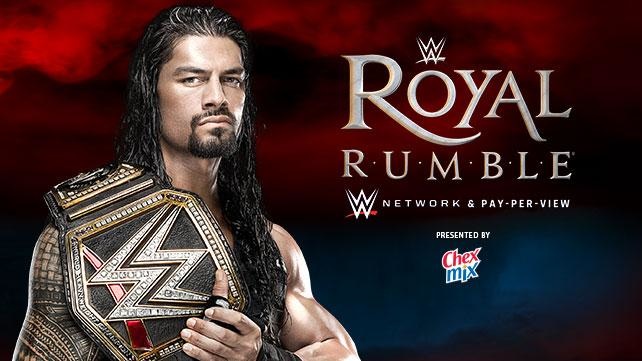 Now we get to the finale, the main event.  Roman Reigns defends his newly won title against twenty-nine hungry superstars who are all vying for his WWE World Heavyweight Championship.  Roman, who defeated Sheamus on Monday Night Raw the night following his disappointing loss at the TLC pay-per-view, faces incredible odds against him heading into Sunday's popular event.

With a list of Superstars who would be considered favorites on the shelf (Seth Rollins, John Cena, Randy Orton, Cesaro, etc.), the field is not nearly as stacked as it could be.  Roman, to be honest, is the odds on favorite as of right now in my opinion.  Despite the Wyatt Family looking dominant to end both Raw and Smackdown by beating down "The Beast Incarnate" Brock Lesnar, I don't see Bray coming out on top.  The same can be said about Lesnar.  I believe those two are destined to tango at Wrestlemania 32.

What about some surprise, large entrants that could be of some serious threat?  Kane, Undertaker perhaps?  What about the always threatening, but never really in the race, likes of The Big Show or Mark Henry?  I doubt either of those make a serious run.  We all know the several that don't have a shot in hell like The Social Outcasts, Tyler Breeze, Neville, The New Day, Zack Ryder, Damien Sandow, etc.  That already eliminates at least ten competitors.

Now we get to the potential surprise entrants.  Do we see some NXT stars the likes of Apollo Crews, Samoa Joe, Baron Corbin, Sami Zayn?  Some of the tag teams like Big Cass and Enzo, The American Alpha (Jason Jordan and Chad Gable), or Blake and Murphy?  What about Finn Balor?

Could we see the debut of the highly anticipated names like Shinsuke Nakamura, The Bullet Club (Karl Anderson and Doc Gallows)?  How about my favorite wrestler of all-time, AJ Styles?  I personally don't see any of those guys making their debuts on Sunday, especially Styles.  I think he either comes out the following night or on this week's Smackdown.

My personal pick is Triple H.  I believe that it makes sense being that we haven't seen him since TLC.  Roman has been tormenting Stephanie and Vince McMahon for weeks.  Triple H comes back, eliminates Roman towards the end or somehow screws Roman to hold the title in safe keeping until Wrestlemania, where Roman will have the chance to win it back again, for the third time now.