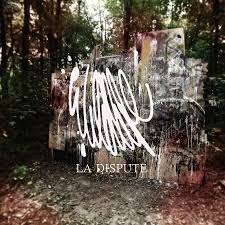 Once again, another review I wrote during the 2011 calendar year while attending Lock Haven University.  The review revolves around La Dispute's second full-length LP, Wildlife.  It was an exceptional album and like their other works, took multiple listens to fully understand the complexity and diversity of the art.

Here is a link to the original article.

La Dispute’s Jordan Dreyer and company release their first full length album, “Wildlife,” three years after their critically acclaimed “Somewhere at the Bottom of the River Between Vega and Altair” and it is just as powerful.

Though the aforementioned album dealt with themes such as love, religion, loss, death, and many more of the crucial ideas in life, it had a fantastical feel to it. It was based off of an old Chinese myth about a shepherd boy seeing a king’s daughter nude at a river and how the two instantly fell in love; but once the princess’ work slowed, the king got angry with the young lovers and flooded the rivers, banning the two lovers to the heavens.

The king allowed the lovers to see each other once a year, on the seventh day of the seventh month. Vega and Altair were the stars they were banished to and on July seventh, if you look up, you can see them together.

Now, back to “Wildlife.” Jordan Dreyer can be noted as one of the best lyricist of this generation. Each tune has such an amazing amount of emotion and insight that each one will leave your jaw dropped on the floor. The angst, pride, confusion and anger demonstrated isn’t as prominent as previous releases, but you can tell he has grown up as a musician and especially a man, carefully crafting his ideas into tighter, more realistic settings.

Dealing with issues such as love lost, questioning one’s faith and the confusion of the world, Dreyer brilliantly fuses them in with the different rhythms of the music. Each song conveys a different feel.

Some tracks have a straight up punk feel, while others sound like nothing more than background to his unique spoken word delivery. The rest of the songs are post-hardcore royalty.

The musicians in La Dispute are some of the most talented musicians you will ever hear in your life, especially through headphones. That’s where the beauty of this release shines; when you’re up close and personal with it.

The diversity shown throughout also shows the maturity the band has developed as well, going back as far as their very popular EP, “Vancouver.”

Another thing to point out with Dreyer and his lyrics are how almost in every song, there is such an amount of alliteration that your jaw hurts afterward from trying to keep up all of the time. Lines like, “Last snowfall left splinters and some winters never end; neither wane nor wear/And sunshine is like lovers and some summers just pretend; only warm the air.”

The album is really tough to decipher which is the central message. As mentioned, many tracks can be presumed that he is talking about a lover that left him. Songs like, “Safer In The Forest/Love Song For Poor Michigan” and “The Most Beautiful Bitter Fruit.”

Others can be related to him questioning the existence of God. Tunes like, “A Departure,” “A Poem,” and “Edward Benz, 27 Times.” Others are just stories that he crafts so beautifully, especially “King Park.”

Regardless of your preference of La Dispute, whether you like the “Here, Hear” series or the harder “Vancouver” EP, you will get a beautiful mix of the two.

If you are expecting a better album than the “Somewhere” masterpiece, you may have to wait for the next one. This CD is absolutely incredible, but not jaw-dropping or one to leave you breathless. It takes a lot to beat such a concept album as “Somewhere…Vega and Altair,” but this real life concept album is only one step away.

Phenomenal release from even more phenomenal musicians and human beings.

Bands Similar: The Saddest Landscape, Pianos Become The Teeth, Touche Amore, I Would Set Myself On Fire For You, Pg. 99, Saetia, mewithoutYOU, and Suis La Lune.