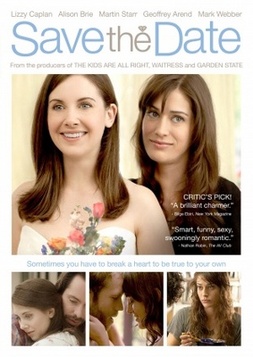 Two sisters dating two members of the same band have different relationship issues in the indie rom-com, Save the Date.  Sarah and Beth (Lizzy Caplan, Alison Brie) are with the two members of Wolfbird, Andrew and Kevin (Martin Starr, Geoffrey Arend).  Beth and Andrew are engaged, while Sarah and Kevin are about to take the next step and move in with one another.  After a couple of weeks living together, Kevin proposes to Sarah after an energy fueled set to which Sarah responds by walking away.

Sarah is attempting to find what makes her happy and is overwhelmed by the fast-paced world around her.  At the show, before the disastrous proposal result, she runs into Jonathan (Mark Webber), a frequent customer at the book store she manages.

Throughout the film, Sarah navigates her emotions with Kevin, the overbearing musician and Jonathan, the perfect suitor who would die for her on cue if asked.  Contrasting Sarah's story is the tedious preparation storyline of Beth and Andrew as they attempt to plan the perfect wedding. 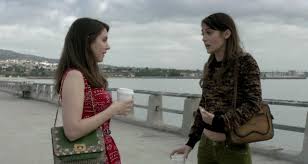 Alison Brie and Lizzy Caplan
Lizzy Caplan and Alison Brie are perfect on-screen as sisters.  Their chemistry is impeccable and they are very believable as the film progresses and the two have to deal with each other's differing scenarios.  The sisterly bond, and sometimes lack of, is illustrated perfectly the two are scene stealers when all the major players are on screen.

On the male side, I said it before; Martin Starr is fantastic.  Usually the nerd or awkward character, Starr plays a down-to-earth and mellow musician who is dealing with the fact that he is getting married.  His quote later in the film sums up his anxiety perfectly.  To paraphrase, "The next time I'll be alone is when Beth dies.  Or I die."  It is a scary thought that I'm sure everyone has going into marriage.

Geoffrey Arend, who I thought was fantastic in (500) Days of Summer as Tom's (Joseph-Gordon Levitt) co-worker/friend, equals that work with his performance of a broken man after his soul crushing humiliation.  Anyone who has ever been broken up with or even worse, in such a horrible fashion, can empathize with him and his struggle.

Mark Webber is a criminally underrated actor.  His performance in the film is incredible, to be honest.  It may not be the most soul searching role or difficult to play, but he plays it with such ease and genuine conviction that not one woman watching would not fall in love with him.

Speaking of in love, that's what I am with Lizzy Caplan.  She is drop dead gorgeous, funny, intelligent, and a real treat to watch on screen.  She plays Sarah perfectly and commands the audience's full, undivided attention.  Her range is limitless and within a year or two, predicting of course, she will be a true A-list celebrity.  Once again, perfect performance.

Save the Date is funny, heartbreaking, and a breath of fresh air in the romantic comedy genre.  Each actor was perfectly cast, the story is well done and fleshed out and the cliffhanger ending makes you want more of the story.

Save the Date can be streamed on Netflix and purchased on Amazon, along with many other retailers.