"Ladies and Gentlemen, My Name is Paul Heyman" DVD Review 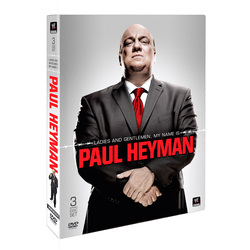 DVD cover courtesy of WWE Shop
Ladies and gentlemen, my name is Adam Williams and I am here to tell you without a doubt in my mind that the most recent DVD release by World Wrestling Entertainment (WWE), "Ladies and Gentlemen, My Name is Paul Heyman" is the best DVD the company has ever released, bar none.  Yes, CM Punk's "Best in the World" was quite good and yes, the Shawn vs. Bret: WWE's Greatest Rivalries DVD was incredible, but Paul Heyman's tops all releases to date by a large margin.

The three-disc DVD (or two-disc Blu-Ray) story of Paul Heyman's beginnings, successes, failures, and multiple tenures with multiple promotions is chronicled with a two-hour documentary on Disc One, followed by two DVD's full of Paul Heyman promos from the AWA, WCW, ECW, and WWE along with never before told stories.

Heyman's rise through the wrestling ranks began at the age of 14, when he would be a ringside photographer for several wrestling magazines.  Of course, Heyman stepped on some toes as he got in close with his managerial idols "Classy" Freddy Blassie, Captain Lou Albano, and The Grand Wizard and worked his way into several shows that he probably shouldn't have, however, Heyman was a master at the hustle, even back in the 1980's.

The story continues to document his rise as a popular talent throughout the territories, making his most notable impact in the AWA under the moniker of Paul E Dangerously.  Equipped with an over-sized cell phone and a large mouth to boot, Heyman quickly became one of the most hated personalities with the fans as he managed the Original Midnight Express.  His promos, even in his early 20's, were something to behold as he drew heat from almost every arena he ever traveled to.

Heyman's tenure in WCW was an impactful one as he created arguably the most underrated stable/faction of all-time, The Dangerous Alliance.  Superstars in that alliance included the leader, "Ravishing" Rick Rude, "The Enforcer" Arn Anderson, "Beautiful" Bobby Eaton, Madusa (Alundra Blayze), and then up-and-coming US Champion, "Stunning" Steve Austin.

The bulk of the DVD focuses on Heyman's brainchild, Extreme Championship Wrestling (ECW).  Interviews by ECW legends like Raven, Tommy Dreamer, and Mick Foley, just to name a few, illuminate Heyman's influence on his lockerroom, how in-sync he was with writing, producing, and editing the product, and his pure genius with creating the alternative brand of wrestling.  Stories about his manipulative ways with the talent and crew, his ordeal with the network (TNN if you wondering), and the pitfalls of ECW are discussed with no filter and clarify popular stories that had been floating around for the better part of 15 years now.

Wrapping up the story, Heyman's WWE days from his start as a color commentator alongside one time mentor, Jim "JR" Ross to his days as lead Smackdown writer, his termination and return back with the company two years ago are covered in a relatively quick pace.  His managerial times with Big Show, CM Punk, Curtis Axel and Cesaro are not covered in-depth like his time with Brock Lesnar, however, I understand that one needs to end the DVD at some point.

"Ladies and Gentlemen, My Name is Paul Heyman" is a once in a lifetime story told by the greatest storyteller the business has ever seen.  Heyman comes off as authentic as ever and you hang on his every word, just like you do when he has a live microphone.  The son of a Holocaust survivor mother and an injury lawyer father has made an indelible mark on the industry of professional wrestling as a creative genius, an amazing mind for the business, the greatest talker of all-time, and as the greatest manager of all-time, period.  After all, he is the one behind the one in 21-1.

Everything on the DVD is exceptional and the knowledge gained throughout this viewing experience is invaluable.  Heyman's insight to the business is awe inspiring and his drive to be the best is one of the most incredible stories you'll ever experience.  For those who are Paul Heyman guys, like myself, or those who don't like him, for wrestling fans and non-wrestling fans, whatever category you may fall under; this DVD is a MUST HAVE item in your collection, simply because it is the best and it is absolutely fitting for Mr. Paul Heyman.