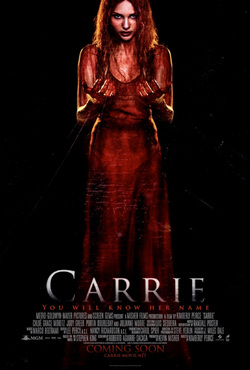 Most horror remakes miss the spot completely.  Take for example Evil Dead, Halloween, Friday the 13th, A Nightmare on Elm Street, and so many more.  Most remakes just do not equal the same amount of shock or edge that their predecessors did.  Don't get me started on foreign language-to-English adaptations of horror movies either.  That's another article completely.

Getting back on track, the 2013 release of Carrie was one I was looking forward to with a high amount of anticipation.  Chloe Grace Moretz, in my eyes, is one of the most outstanding young actresses in Hollywood today and she did not disappoint one bit in this film.  Her take on the troubled and confused, yet gifted teenager Carrie is spot on and full of the aforementioned adjectives along with the angst and fear that one feels in high school.  All of that inner turmoil and bullying by other classmates builds up until the inevitable breaking point and classic Prom Night scene where Carrie unleashes Hell on everyone.  And it.  Is.  Awesome.

Without giving too much away, Moretz's acting in that span of time is bone chilling, astonishing, and simply one of the finest pieces of acting I have seen in an incredibly long time.  My jaw was left hitting my knees after her revenge.

Another outstanding performance goes to Carrie's mother played by Julianne Moore.  You want to talk about a nerve jarring portrayal of a woman bewildered and angered at the world, also disillusioned by religion, Moore's acting was impeccable.  There are so many chilling scenes featuring the single mother who believed that Carrie was "cancer" that one is almost required to sleep with the lights on.

Director Kimberly Peirce did a fine job directing a relatively young, inexperienced cast through a good remake of a classic 80's horror film.  Her choices to keep original scenes from the first film was a nice touch and bit of nostalgia (ie. where Carrie makes the teasing child fall over on his bicycle).

While this film did not surpass its original or duplicate it in many ways, Carrie did its job.  It provided a new generation with a new take on the classic film, while establishing its own identity.  Moretz and Moore were unbelievably good in the film, giving it that "wow" factor, but aside from their acting, everything else about this film was simply good.  I do, however, recommend it if you're looking for a good psychological horror film or if you want to see snotty spoiled teenagers get what's coming to them after their endless torment of Carrie White.

At the end of this film, one thing is for certain.  Carrie White (Moretz); you will know her name.