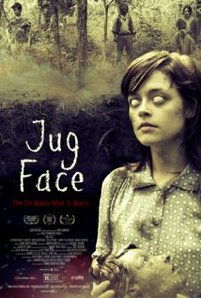 Photo courtesy of IMDb.com
In this macabre, unique Southern drama, Jugface is an unsettling look at a less than civilized community when they find out that one of their own, Ada, is baring child although she is not married.  In this society, that is a sin that must be brought to The Pit, where it will cast the ultimate judgment.

The Pit is an ambiguous presence that does not have a true backstory, but its lore has overtaken the townspeople and their ability to judge for themselves.  Fathers, mothers, and even children may be sacrificed to The Pit if they are what it craves.

Ada (Lauren Ashley Carter) is a teenage girl that lives under the strict rules of her parents and has a feeling that she is destined for a better life than the one she currently lives.  After finding out that she got pregnant from her secret lover, Ada has to be careful about who, if anyone, should find out.  After her Uncle Dawai (Sean Bridgers) is done with his latest "jugface" creation of the next sacrifice for The Pit, Ada realizes that it is herself and has to do everything in her power to survive the horrific fate.

If you are looking for a unique, uneasy, raw, gritty, and downright creepy movie to kick off your October sci-fi/horror themed viewing experiences, Jugface is the perfect hidden gem to turn into a cult classic.