When you think of sports with a rich heritage in Philadelphia, Pennsylvania, you look at the Big Four: 76ers, Phillies, Flyers, and of course, the Eagles.  You can look at boxing (thanks Sly Stallone) and wrestling as well as mega sports in Southeastern, PA, but the casual athletic fan may not associate the "City of Brotherly Love" as a die-hard skateboarding mecca.

Chris Cole, arguably one of the best street skaters of all-time, hails from just outside Philly and in the recently released Adam Bhala Lough documentary, Motivation 2: The Chris Cole Story, we see his evolution as a young child begging his mother, who was an ICU nurse, for a skateboard to becoming one of today's role models and members on this generation's Mount Rushmore of street skaters.  Below is an official description from its IMDb.com page:

Shot over the course of a year in San Diego, Los Angeles, Philadelphia and China, Motivation 2: The Chris Cole Story is the story of a man that earned his place as an innovator, motivator and legend in skateboarding that now creates inspiration and opportunity for a new generation. Cole's progression from humble neighborhood beginnings to the world of elite street skateboarding is revealed through recently discovered archival footage, presenting a skater that went on to achieve the highest amount of skate contest wins, a list of defining video parts, being twice selected as Thrasher magazine's Skater of the Year, back-to-back X-Games gold medals, and becoming the 2013 Street League Super Crown World Champion. 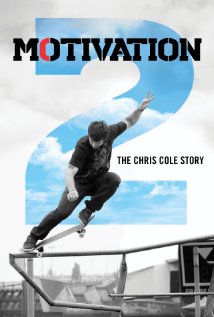 Photo courtesy of IMDb.com
I won't say that I'm an avid skateboarding fan, but I do not have any issue with it.  I do enjoy it when I watch, but it is not a passion of mine like it is to some.  However, if it were up to me to watch either a half-pipe competition or a street league session, I'm going with the latter every time.  I love the precision, the skill, the detail put into every trick and how the tricks are not flashy.  Sure, a 900 is an amazing feat and watching a flawless half-pipe routine with ample air and diverse tricks are cool, but I love the intricacies of street skating.

Cole is one of the first skaters I took a liking to in the sport, followed shortly by Nyjah Huston.  Cole is a calculated skater who looks effortless while pulling off tricks only the elite can do.  Back that with his humble nature and good spirit, you can't help but like the guy.

The documentary is well done and told well.  Chronologically, it hits major storylines throughout Cole's career, including his first days on a board, to creating sponsor me tapes, to getting in touch with his idols and role models.  We have a host of cameos including Bam Margera, Tony Hawk, Rob Dyrdek, Huston, and many, many more of Chris' childhood friends to street league competitors/friends.

Motivation 2: The Chris Cole Story is a fine documentary about a good, humble human being who turned his dream into a career and is now helping kids with similar dreams attempt to achieve theirs.  It is filled with insight, humor, great stories, and fantastic skateboarding.

Highly recommended for anyone.