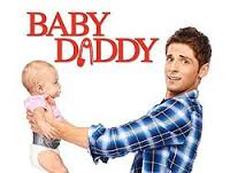 Baby Daddy is an ABC Family comedy, currently with three* full seasons on Netflix, that centers around a group of New York City friends who have all had their lives drastically altered once Ben Wheeler (Jean-Luc Bilodeau) is greeted with a baby at his doorstep.  The child came with a note that unveiled the reason why she was placed there; the child is his.  Ben, along with his roomates Tucker (Tahj Mowery) and his New York Ranger brother, Danny Wheeler (Derek Theler) are tasked with raising the baby, although they are hesitant at first.

Entering into the fold is Riley (Chelsea Kane), who has had a crush on Ben since they were children, but is also unaware that Danny has had a crush on her for as long as he can remember.  The love triangle angle has not been played into full yet, but the teases that we've had as an audience have been entertaining.  Riley is also an aspiring lawyer and has her trials and tribulations within the scholastic world, but also the dating world as she just can't seem to find the right guy for her, or so we're led to believe.

Lastly, we have the matriarch of the Wheeler family, Bonnie (Melissa Peterman).  Bonnie lives in close proximity to the boys and takes on the role of the overprotecting grandmother to a tee.  She is always involved in some form with the boys and at times, gets herself into worse or even more embarrassing situations than the kids of the show.

Baby Daddy is a goofy, entertaining half-hour of television supported by a young, but experienced cast that shows the ups and downs of being a single parent, the benefits and pitfalls of friendships/relationships, and mostly, what not to do if you're raising a child on your own.  The show has its cliched comedic themes, but it works with the cast and their chemistry on the show.  Not one performance feels forced, the direction is good for most episodes and it is an engaging show that you could easily get lost in for several hours.