Brock Lesnar: How Will He Be Booked? 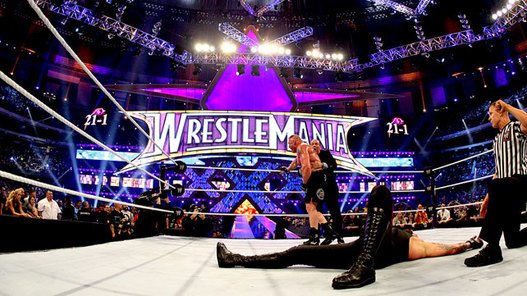 Brock Lesnar standing victorious at Wrestlemania XXX (Photo courtesy of WWE.com)
With SummerSlam five days away, the main event is billed as The Champ vs. The Beast.  The two participants are John Cena, WWE World Heavyweight Champion and The Conqueror of the Undertaker's Wrestlemania Streak, Brock Lesnar.  The two have done battle in the past in brutal, physical bouts and I do not expect this match to stray away from that.  Cena's current promos about his passion for the business versus Paul Heyman's ingenious promos every single time he grabs a microphone set the stage for a testosterone fueled war for the belt.  At the end of the day, I fully expect Brock Lesnar to be crowned the new WWE World Heavyweight Champion.

Now, here is where the problem occurs.  How do you book Brock Lesnar after he becomes champion?

Clearly, he will never work a full schedule again, so his television time will be similar to The Rock's in 2013 after he defeated CM Punk to end his historic 434 day streak as champion, which was also led by Paul Heyman.  Lesnar as champion will be lethal and almost untouchable, which makes booking him that much harder.

Even if Lesnar is to win on Sunday, whoever eventually wins the title from him will taint the Streak being conquered.  Lesnar, in my eyes, should be untouchable; no one should even pose a challenge to him once he wins the championship.  His reign should last for as long as he wants it to because lets be honest, no one is going to be happy to who he loses/drops the belt to.  With Lesnar almost set to win the belt this Sunday, the future for the Beast is one that will be sure fun to watch because of the potential storms it will cause within the WWE, probably that of a F-5 in nature.

What do you think, WWE Universe?  Leave a comment in the section below: