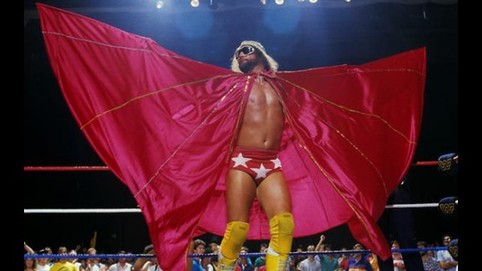 Announced on the January 12th, 2015 edition of Monday Night Raw, "Macho Man" Randy Savage will be posthumously inducted into the WWE Hall of Fame.  Known for his intensity in and out of the ring, his aerial acrobatics that were groundbreaking, and his unique promo style, Savage entertained millions during his wrestling career as the Intercontinental Champion and two-time WWE Heavyweight Champion.  His rivalries with Hulk Hogan, Jake "The Snake" Roberts, and Ricky "The Dragon" Steamboat are legendary and will live in the annals of time as some of the greatest of all-time.

To this day, many fans and wrestling experts consider his bout with Steamboat at Wrestlemania III at the Pontiac Silverdome the greatest match of all-time due to its non-stop action, multiple pinfall attempts and ferocity with which the competitors displayed that evening.

There is absolutely no denying that Savage is one of the greatest wrestling personalities of all-time and that he is on the Mount Rushmore of wrestlers that defined the 80's.  His colorful ring attire and second-to-none voice was only a small part of the package that Savage brought to the ring.  He, in my humble eyes, is the greatest athlete the WWE had during their years from the mid-80's to early-90's.  His ability to fly, most notably his pin-point accurate Flying Elbow Drop, was jaw dropping at the time and the sheer pace with which his matches were wrestled would make half of today's roster gassed.

And, who can forget his at times confusing, at times subliminally genius, but always entertaining promos:

The Greatest Couple That Ever Lived 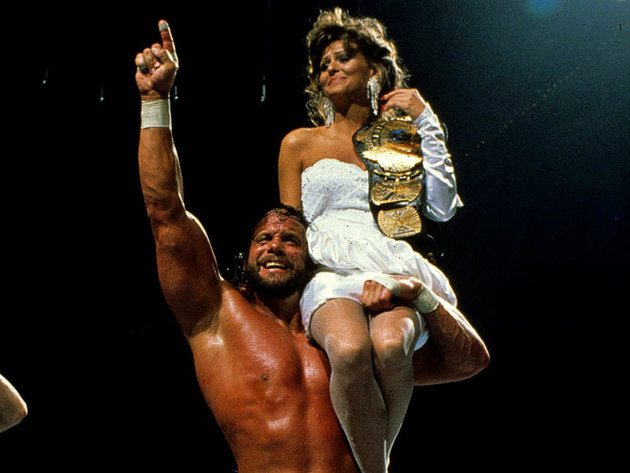 Photo courtesy of drfunkenberry.com
It also goes without saying that his on-screen relationship with then wife Miss Elizabeth is and will always be the greatest romance in professional wrestling history.  His proposal in July of '91 and the wedding that followed, "Macho Man" and Miss Elizabeth headlined SummerSlam '91 and still brings a tear to the eye of the sentimental wrestling fan, myself included.

The way their romance played out for the world to see is something that will never be topped in professional wrestling, or pop culture for that matter.

Their chemistry was impeccable and their on-screen combination as wrestler/manager is the one of the greatest of all-time.  The way Savage always protected her and would do anything for Miss Elizabeth was the definition of the fairy tale romance that many women seek today.  It is no secret, however, that Randy was very protective of Elizabeth, even banning her from ringside and locking her in the couple's locker room so none of the other wrestlers or personnel backstage could try anything without Savage knowing about it.

Randy and Elizabeth were married, outside of the WWE, from 1984 to 1992 where the two, after struggling with the pressures of the wrestling life and Randy's jealousy/controlling nature decided to file for divorce.  The divorce crushed Savage for a bit as he truly loved the most beautiful woman in wrestling history.

Savage's tenure in WCW was spent like most of his former WWE colleagues.  He held the WCW Heavyweight Championship, joined the nWo and earned boat loads of money.  He also gained fame for his outrageous Slim Jim advertisements.  "Snap into a Slim Jim!" he would exclaim before biting into the snack.

His heated relationship with WWE spans back to his commentating days where it is noted that Vince McMahon wanted to go in different way, highlighting the newer and up and coming talent such as Bret Hart, Shawn Michaels and Razor Ramon (Scott Hall), just to name a few.  He felt insulted by McMahon, believing that McMahon thought he could not perform at his excellent level in the 80's.

He also took some personal shots at the McMahon family, making comments about a young Stephanie McMahon that may not have been the most appropriate thing to do in hindsight.

Throughout his career and post-wrestling life, Savage was a charitable man and genuinely good with the media upon many requests.  He dropped a rap album in 2003, Be A Man, most notable for its diss track towards one time friend, long time enemy Hulk Hogan.

Savage tragically passed away on May 20, 2011 in Seminole, Florida after a heart attack that led to a car crash.  He was 58.

In late 2014, WWE released a DVD/Blu-Ray special Macho Man: The Randy Savage Story, which highlights his start in professional wrestling all the way up to his death.

With very little negative comments to be said about Randy Savage and his wrestling career, one has to ask why it took so long for a Top 10 superstar of all-time to finally be inducted into the WWE Hall of Fame. 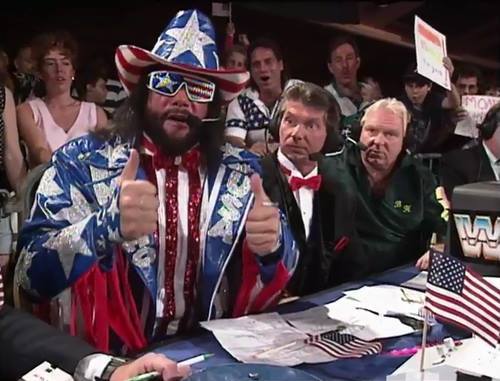 Photo courtesy of wrestlestars.com
While "Macho Man" deserves his spot, hell, his own wing in the Hall of Fame, it comes much too late.  I understand that it is supposed to be a joyous occasion, but I do not believe in the "better late than never" adage.  Randy Savage is one of the most charismatic superstars/pop personalities of all-time and it is absolutely tragic that we will not hear him speak in April.  Can you imagine his Hall of Fame induction speech?

I can, but unfortunately I along with millions, will not be able to see it and that is the saddest part of his induction.  He tragically passed away much too soon, but the outlandish, yet humble Savage would have had one of the truly memorable speeches of all-time.

Another factor that upsets me about his induction is that Hulk Hogan will be inducting him.  Hogan, a heated rival both in and out of the ring, has no right to induct Savage, but what is sadder is that there probably was no one better to do so.  Lanny Poffo, his brother, will no doubt accept the honor, but I feel once again, Hogan will attempt to steal some of Savage's spotlight, just like he did as part of the Mega Powers in the 80's.

Lastly, I cannot help but think that Vince McMahon had postponed his induction until a moment like this.  There are many shady men in wrestling and for all that McMahon has done well, let's look at some of the greatest wrestling inductees to be inducted posthumously, much too late:

Yet, McMahon has inducted several wrestlers that either deserve Hall of Fame recognition or are questionable Hall of Famers, but came before legends like The Ultimate Warrior and Savage:

Now, I'm not saying that Eddie Guerrero, Edge, and Mick Foley don't deserve to be in the Hall of Fame, but did they deserve it sooner than Warrior or Savage?  No, absolutely not and I will forever stand by that claim.

I personally feel like McMahon had waited until Savage passed away and is trying to make amends with, in a way, a "pity" induction and it is upsetting.  For all Savage did for the industry and his positive contributions in life, Savage deserved to be inducted while he was alive and could enjoy it with the fans.  Instead, it has turned into another solemn celebration at the Hall of Fame.

Call me bitter, but I've been called worse and I'm fine with that title.

"Macho Man" Randy Savage is, in my mind, in the Top 5 for greatest of all-time.  His in-ring work was fantastic and artistic, his promos were engaging and entertaining and he as a human being was a special man that the world lost too soon.  "Macho Man" Randy Savage will be forever missed, but all complaining aside, he will rightly take his throne as the "Macho King" of the WWE Hall of Fame. 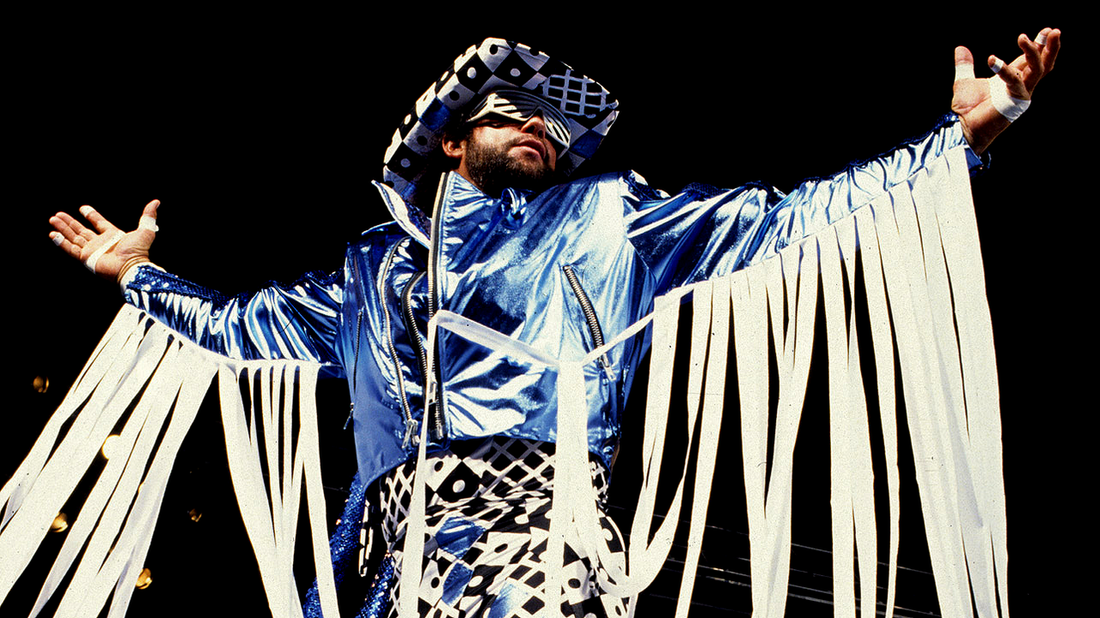