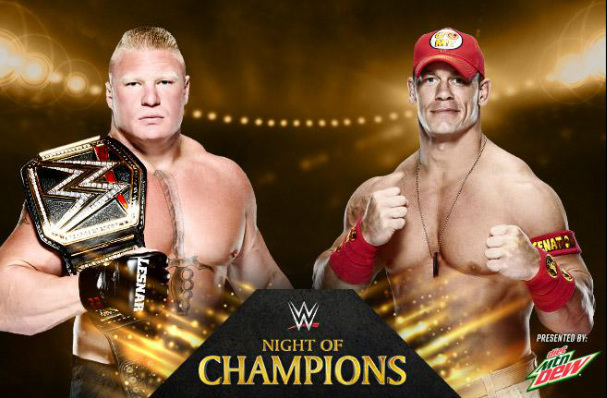 Photo courtesy of WWE.com
After an abysmal night of predictions at SummerSlam, I return with my predictions for September's "Night of Champions" PPV, which you can view on the WWE Network for, you guessed it, only $9.99.  Shameless plug inserted-check.

The card has several intriguing match-ups, where done properly, could make NOC one of the more talked about PPV's of the year.  All six championships are up for grabs, which means some champions are retaining while others will drop back into the shuffle of contenders as they are knocked off and no longer the keeper of the title.

The addition of Nikki Bella to the SummerSlam rematch of Paige and AJ Lee really does nothing for me in terms of changing my predictions.  The Bella storyline is arguably one of the most painful segments WWE has produced in the last several months and inevitably, I believe Brie Bella will cost her twin sister in the championship match, whether it be with physical interference or playing mindgames with Nikki.

The match really boils down to the strange, yet intriguing relationship between "frenemies" AJ Lee and current champion, Paige.  These are arguably the two best Divas wrestling in the company and possess the potential to be this generation's Trish vs. Lita-like feud.  At the end of the day, I see Nikki Bella being a non-factor and Paige, sneakily retaining her title over AJ Lee.

Sheamus (C) vs. Cesaro for the United States Championship

Sheamus, in the meantime, has pulled a Dean Ambrose in the fact that he has not defended his title in quite a long time nor has he had prominent television time in the last month.  The Celtic Warrior will face a tough, hungry challenger as The King of Swing Cesaro will look to regain his United States Championship, a belt he has not held since early 2013.

Ultimately, I feel that the crowd is ready for Cesaro to step up and be a player once more in the WWE and with the US Championship, he will be taken more seriously.  Expect an incredibly physical match filled with stomps, knee lifts, and uppercuts; just like the Europeans love it.

In another patriotic, USA vs. Russia match, we will see the two big men mix it up in the ring, but this time there will be no flags fought over or arm wrestling competitions.  This will be a slow, methodical match that may be a bore for the fans besides the obvious "USA!  USA!  USA!" chants that will be cheered loud and proud throughout Henry's inevitable struggles against the Bulgarian Brute.

Monday night to close out Raw, we saw Henry break out of Rusev's Accolade finishing submission maneuver.  This Sunday, I believe we see a weakened World's Strongest Athlete as he meets his match against the young, up-and-coming Russian Super-Athlete as Rusev will "CRUSH" (raises fist) Henry.

The Usos (C) vs. Goldust and Stardust for the Tag Team Championships

The Usos have had a fantastic run as Tag Team Champions and put on several incredible match-ups with the Wyatt Family.  Their characters are over with the crowd and their high-paced, high-octane style enthralls the WWE Universe on a nightly basis.  Jimmy and Jey, you can say, have single-handedly revived the tag team division.

The Dust Brothers, as I call them, are ready to reclaim those tag titles that they once won from The Shield back in 2013 to regain their jobs.  This time, they are bitter and vicious.  Goldust has never been better in the ring and with his irritable facial expressions and Darth Maul-inspired facepaint, is more dangerous than ever.  Stardust is absolutely out of this world.  What Cody Rhodes has done with this character is absolutely amazing to me and makes Stardust must-see TV every week.

With that being said, I believe the Usos will go down as one of the best teams from this generation, but it is time for some new blood to hold the titles.  This match has the possibility of stealing show; make sure you stay tuned for this.

Both superstars are coming off of rivalries with Roman Reigns and Bray Wyatt, respectively and have been put together to show that two veterans can put on a wrestling clinic.  Orton and Jericho are arguably two of the best ever and with their intelligence for this business and elite psychology inside the ring, I expect nothing but a technical masterpiece from these two.

Orton, who I believe is the best of this era by a longshot, attacked Jericho viciously on the season premiere of Raw two weeks ago, creating the rivalry and was later defeated by the sneaky and cunning Jericho on the following Smackdown.  The Viper will be looking to strike and get some revenge on the Ayotollah of Rock N' Rolla this Sunday at Night of Champions and I believe he does just that with another jaw-dropping RKO.

Dolph Ziggler (C) vs. The Miz for the Intercontinental Championship

Dolph Ziggler is an Internet fan's favorite wrestler and his win at SummerSlam over The Miz had to come as a shock to most of them.  It certainly threw me off, however, no one on that roster deserves a title more than Ziggler.  He is night-in and night-out one of the best performers on the card.  The Miz, however, is no slouch himself, it is just that his character is not much different than what he has been for so many years already.

Currently the two superstars have had a series of gimmick matches with their tag team partners R-Ziggler and Damien Mizdow, aka their Stunt Doubles.  While the matches are entertaining, I do not expect many jokes from bell to bell between the two Ohio natives.  These superstars, when given the time to shine, can put on some excellent matches, unfortunately, I believe they will be placed in an unfavorable slot on the card and may not have the best time to maximize their minutes.  Either way, I feel that it is too early for Ziggler to drop the title back to the Miz and that there are many feuds Ziggler could enter into and revitalize the Intercontinental Championship back to its true prestige.

First, I must start out by saying that rumor has it Dean Ambrose may be at Night of Champions, interfere causing Kane to come out.  The four participants would then have a tag team match.  If this happens, I predict Reigns and Ambrose with the victory.  This theory looks a little more possible after WWE gave us Reigns vs. Rollins for free on Monday Night Raw.

But, if the original match is supposed to take place as is, I see, yet again, another match where members from The Shield tear down the house and steal the show.  Reigns has the fans eating out of his hands and Rollins has the fans spewing venom at him every night.  Basically, these superstars have what they want; an established connection with the audience.  Reigns overall combination of speed, power, athleticism, and appeal is on another level compared to 90% of the WWE locker room.  Rollins has been playing his heel character to a tee and has found ways to weasel his ways to victories over Ambrose whenever possible.  I do not expect anything different this Sunday at Night of Champions.

Mr. Money in the Bank steals another big time win, but may have someone waiting for him by the end of the match...

UPDATE:  Roman Reigns had emergency surgery on Saturday and will NOT be competing at Night of Champions against Seth Rollins as scheduled.  Reigns noticed some discomfort from an already lingering hernia injury and headed to a local Nashville hospital to have immediate surgery to solve the problem.

This leaves WWE in a bind, with one of its budding stars on the disabled list for what one must assume, a good while.  Roman Reigns and Seth Rollins, in my mind, would have had an incredible match, however, this injury leaves Mr. Money in the Bank searching for a new opponent.  Does WWE throw him in with a scrub opponent like Jack Swagger or someone of a similar status in the WWE?  Does Dean Ambrose come back a night early to substitute for Reigns or does he just blindside Rollins during a backstage interview?  Will Rollins even be on the card at all?

Or, does WWE have a "Plan B" themselves, using Rollins later in the evening to become the new WWE World Heavyweight Champion after cashing in on the then newly crowned champ, John Cena?  While that scenario would get the WWE Universe buzzing for a quite a bit (and probably not because of the cash in, but rather Cena's historic 16th title reign), I do not see it happening.

I'm leaving my original prediction on the site seeing as I truly believe Rollins would have slithered his way to another cheap win.  I have no idea what WWE is going to do with Rollins just less than 24 hours away from Night of Champions, but whatever they come up with, hopefully it's a hit.

Winner: Seth Rollins and the fans

John Cena got the upper hand on Lesnar on Monday Night Raw leading into Night of Champions, however, if the theory is true that whoever looks to be on top at the end of the go-home Raw show loses at the PPV, then I feel sorry for many John Cena fans.  That theory, however, has no effect whatsoever on my original pick.

It makes absolutely no sense for John Cena to be decimated a month ago only to come out on top for a sixteenth-time against the Beast Incarnate.  Brock Lesnar threw Cena around like a rag doll sixteen times at SummerSlam to win the WWE World Heavyweight Championship for the first time in over ten years.  I feel that the match will be more entertaining and competitive than their previous encounter, but I see Lesnar retaining and not being challenged for the belt seriously until Wrestlemania 31.