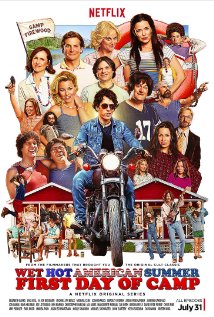 Welcome back to Camp Firewood, campers!

Fifteen years after the cult classic film was released, Wet Hot American Summer: First Day of Camp answers questions about the counselors that we may have had while watching the 2001 film.

We are welcomed to witness the beginning of the Summer of '81.  We see Andy's hysterical entrance, albeit a week late.  We witness how Beth became Camp Director.  We find out that Gene wasn't really Gene, but ultimately was Gene.  We find out how the can of vegetables got its voice and we see Coop's first summer love along with the birth of the Andy and Katie "Katie love-Andy loves and hate" relationship.

We see the beginning of a beautiful romance in McKinley and Ben, how Abby Bernstein became a woman, and we learn whether or not Victor Gulak has conquered as many conquests as he says he has.  And, one more of the many, many things we learn about the campers and counselors at Camp Firewood is how, and why, Lindsey was sent to the camp.

Once again, a government conspiracy puts the camp at risk and it is up to Beth and fellow campers to save Camp Firewood, and this is on the first day!  Lest we not forget that Camp Firewood has to deal with rival campers, Camp Tiger Claw, as Andy and Katie's budding relationship rubs Camp Tiger Claw's Blake the wrong way.  Did I mention that Katie is dating Blake?  Yeah, that'll be important to rivalry.

If you've seen the movie before the series, you'll catch some inside jokes and be alerted to how certain counselors became the way they did by the end of the summer.  Lindsey's messy eating habits, Gene's schizophrenia, Gail's ability to jump from one man to another, and Susie's intense passion for theater.

With everyone from the original cast returning, as well as a host of new actors and actresses to make up the campers, Wet Hot American Summer: First Day of Camp picks up on the hilarity that was established in the film and, if you can believe it, makes the story even wilder and more unbelievable.  With that being said, however, it does not do a disservice to the film.

Directed once again by David Wain and written by Wain and Michael Showalter, we get an insight into our favorite counselors as they arrive to Camp Firewood for another summer and develop their bonds/relationships.  Filled with even more one-liners than before, more ridiculous scenarios, and Easter Eggs pertaining to the film, this eight episode series is one that can be rewatched multiple times and not get old.