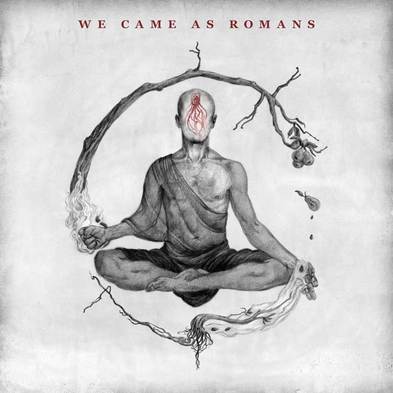 Troy, Michigan metalcore band We Came As Romans self-titled album, released last week, combines all of what the band does well and only amplifies it, showing off a mature sound and solid outing from start to finish.

An observation made on the front cover is that the faceless figure used on their previous releases is now a grown man.  Sitting Indian Style, we see a cycle surrounding him.  The tree is formed, the fruit falls, seeds from the fruit will form the next root for the next tree, and carry on.  It is a theme throughout We Came As Romans' music about rebirth and is once again evident on their album cover.

The fourth studio album by the Equal Vision Records sextet leads off with "Regenerate," a song that slowly builds in the beginning with reverberating guitars and led off with the chant, "Regenerate!/Regenerate this life!"  Proceed to fantastic breakdown number one.  A song that deals with one's selfishness and ignorance, lead vocalists Dave Stephens and Kyle Pavone sing a song of hope with a stiff jab for those to wake up.

"Who Will Pray?" is the second song on the album and mixes a few different genres into it.  It has a very radio-rock sound, meaning that I could easily close my eyes and hear a DJ announce that the song is up next in their rotation.  The music is clean and filled with more clean vocals than screams/growls.  Very similar sounding to early Three Days Grace and that's certainly not a knock.

Arguably the most pop-sounding song on the album is "The World I Used To Know".  Cleanly sung throughout without heavy instrumentation, the song takes on hip-hopish feel for the first few seconds with the cadence of the lyrics and their delivery.  Once again, this song is screaming, "Make me a single!"
"Memories", "Tear It Down", and "Blur" make up the middle of the album and are each different in sound, tone, and message.

The first track could be mistaken for a country song if it weren't for distinct rock guitar sounds.  A very catchy love song.

The fifth track on the album reverts back to the band's aggressive edge and pacing.  "What's it like to wear a crown of dirt?/Selling all those lies with that stupid smirk/What's it like to live a life of greed?/Buying everything that you want and please."  If that's not a shot against those trying to hold down less fortunate and rubbing it in their faces, I don't know what is.

"Blur" is the song that combines the catchy chorus element of "Memories" along with their driving rhythms and focused lyrical attack.  One of the better songs on the album.

Out of the remaining four songs, none really stand out.  "Defiance" has a nice stick-it-to-the-man feel with the lyrics and staccato guitar playing, placing in a very nice breakdown at the end.  The concluding song "12:30" has an eerie feel to it; dreamy vocal delivery and building music in the background the erupts during the chorus.  The way the band can shift between soft and heavy is impressive and sets this song apart from the rest.

We Came As Romans is a self-title for a reason.  Most bands that issue self-titled albums use that as a way to signal a change; a rebirth of their music.  Metallica did, Killswitch Engage did before Jesse Leach returned, and countless other bands have throughout the history of music.  Knowing this helps put the album in context.

This is not the breakdown-followed by-breakdown x10 kind of album.  There is diversity.  There is experimentation.  There are elements from the past that were brought to this record (mix of clean singing with screams/growling, breakdowns, strong, defiant lyrics) but also new additions that help the band branch out (pop sounding instrumentation, genre blending, simpler lyrics).

We Came As Romans never fails to disappoint me, but as a fan who has followed them from the Demonstrations EP and Dreams EP's, this is not one of their stronger outings.  Is it a bad record?  Absolutely not.  I enjoy a majority of the songs and will continue to listen to it until the next album, but does it hold up to To Plant A Seed?  I do not think so.

While I enjoy a majority of the choices made on this album, I could have done without as many radio-rock (that's a term I've come up with simply for this review; not trying to sound pretentious at all) tracks and some more raw, unhinged tracks similar to "Regenerate."

With this being said, We Came As Romans is a solid addition to the band's catalog, but probably not the record that will define their legacy.