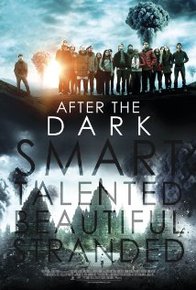 Photo courtesy of IMDb.com
In this philosophy driven drama, an enigmatic and eccentric teacher places his gifted students into three different scenarios to see how well the class would survive during an apocalypse.

After The Dark centers around this class and the decisions made to either rebuild the Earth as they know it or how their choices could ultimately end their lives as well.  The position the teacher puts these students in sometimes is a haunting reality check for most of the bright-eyed students on their last day of their senior year at the Jakarta-based school.

﻿Writer and director John Huddles crafts the story around these intelligent students who have their own secrets and motivations when it comes to the what-if scenarios presented by Mr. Zimit (James D'Arcy).  Students Petra (Sophie Lowe) and James (Rhys Wakefield) stand out in the class, but for very different reasons.  Petra is the star understudy, on the verge of becoming the first person in Zimit's class to graduate with an "A", while James is not the model student.  His strained relationship with Mr. Zimit is a prevalent theme throughout and leads to very tense and thrilling moments throughout the film.

Mr. Zimit also carries the burden of his secrets as in a pretty shocking conclusion to the film, we see that he has had a relationship with one of his students.  Without spoiling too much in terms of the ending, I will not delve too much further into the ending.  Instead, I will just add that there are three endings, all within about five minutes of one another and you can be the judge on which one you will believe as reality.

After The Dark is an exceptionally written drama/thriller about hypothetical situations that we all have thought of at one point or another.  The young cast adds to the authenticity of their dilemmas, however, some of the acting leaves more to be desired and is sub par.  The film stood out in terms of sound, set design, special effects and story in general.  Huddles wrote a clever film that could be looked as "pseudo-intellectual" by some, however, the deeper meaning and themes like relationships, time, and life choices are all very well illustrated and illuminated throughout the script.

The film is a great, and underrated movie that can be instantly streamed on Netflix.