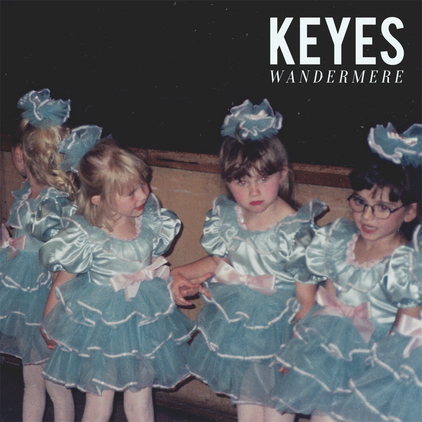 Keyes, a California-based quartet, released their third EP, Wandermere, this past June and continued with their excellent songwriting, melodic instrumentation, and unbridled emotion and passion that they have become known for over the last several years.

Following up their 2012 release, B-Side, Keyes emphasizes their atmospheric sound by lulling the listener into a haunting opening track, "Everything Will Get Better For You."  The quiet vocals that build over the four and half minute track, the longest of the EP, add to the emotion and draw the listener in with every passing note.  The elongated pronunciation of the lyrics in the beginning depict a heartfelt delivery filled with longing and a hint of fragility.

The second half of the song picks up musically and with energy.  The drumming really steers the song in a positive direction with the warbling guitars creating the dissonance that Keyes has been known to create in multiple tracks.  The ending of the song also introduces the faded screams in the background which introduces and enhances another rich layer of texture to the track.

"Forrestal Sleep" has a very similar formula as "Everything Will Get Better For You."  Slow, beautifully played opening, followed by the same vocal progression.  While the formula is a bit repetitive, it works for the EP.  This second track has more of an aggressive pay off, however, with much more screaming/yelling.  After the outburst of emotion, the guitars slowly fade into the distance and lead into "Oak Tree," the shortest song of the EP.

The difference with this song is that the main vocals, for the opening fifteen seconds, are so faded and hidden by laughter and other voices, that the lyrics are hard to decipher.  However, once the vocals come to light, the lines are incredibly deep and emotional.  In fact, each and every song is, but "Oak Tree" really stands out due to its short and to-the-point message.  It is brilliantly written, again, like all of Keyes's songs in the present and past.

"My mind says,
'Brain you’re great keep moving,
But it’s raining
And I can’t see the street.'
Because I like when you call in the morning
Just to say I love your hair.
And if I weren’t so underwhelming
Oh I’ll say it twice,
I still think that you’d be here.
Now you're gone for good."

To wrap up the 12 minute EP is the track, "Sad News In Quiet Rooms" which features Vic Fuentes (Pierce The Veil).  Once again, the song starts off slow to build up the anticipation for the satisfying conclusion.  The track takes on a more poppy tune, one that could be heard on an indie rock station and hopefully is in the near future.  There is an aggression in the song with the guitars, however, the vocals stay even keel most of the time, very little unnecessary inflection.

Fuentes guest spot on the song really adds to the message, which can be interpreted as a fear of change and having to choose to resorting back to the original, same old past.  The fear of settling for the comfortable option compared to taking the risk of moving on, more or less.  It's about being caught in the middle until one event rattles perception and one is forced to change.  The song perfectly closes out the EP and adds to its mystique that it created.
The constant theme of Wandermere is the build-up and Keyes pays off every single time, even dating back to their first EP, Therefore/Without .  Each song is crafted to engage the listener to hang in there with the band as they build to driving, passionate instrumentation along with ambiguous lyrics filled with beautiful scenery, emotional metaphors and a hint of mystery.  They can be open to interpretation and are so unique that they are one of Keyes' major strengths.  To get the lyrics for the EP, either purchase it, watch their YouTube Videos (Keyes), or go to Lyrics Mania and click on the song you'd like to see.

Album downloads can be found on the band's BandCamp page.

All in all, Keyes has produced nothing but impressive and highly underrated albums over the last three years.  Wandermere has a more mature feel and is certainly better produced than the others.  The songwriting is well developed and insightful, with the vocals providing an important emphasis on every word and message being portrayed.  As mentioned before, the addition of Vic Fuentes was a smart idea, creating an attraction to a larger audience.  His vocals did shine on the closing track and were certainly not wasted like some guest spots can be.

Wandermere, although is only four tracks long, is a release that will linger for a long time after the first listen.  There is a subliminal catchiness that will make one return often and relive the winding and heart-achingly beautiful story being presented.