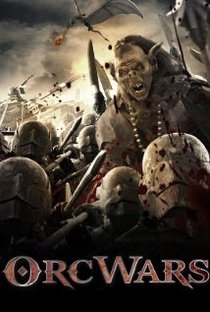 Photo courtesy of IMDb.com
Dragonfyre, originally titled Orc Wars is not a great movie by any stretch of the imagination.  In fact, it may not even register as mediocre.  However, the film has a storyline simple enough to follow, relatively good acting considering the story, and is entertaining.  This is not a film that will win a Razzie and in no way, shape, or form, ever be considered for an award of a higher pedigree.

Now, with all of that said, one must be asking themselves, "If this movie is so bad, why recommend it?"  Fair question, readers.

Dragonfyre tells the tale of an ex-Special Forces Operations soldier, John Norton (Rusty Joiner) and his search for isolation.  The post-traumatic stress disorder (PTSD) is greatly affecting him and he feels a need to escape society.  After settling on a house he's never seen before, his real estate agent, Katie McQueen (Clare Niederprum), takes him to the abandoned house in the middle of nowhere, so we're led to believe.

Meanwhile, in another world, Princess Aleya (Masilea Lusha) is fighting for her life against a horde of ruthless Orcs that have taken over her land.  As a stealthy and formidable opponent, the Orcs want to eliminate the royal daughter and take over the land for good.  During an extensive battle, Aleya runs through a tunnel that only opens up when the two world's moons align.  She, along with several Orcs, are transported to current day America and lo and behold, end up in Norton's backyard.

The previous owner of the house was a partner for Aleya in the past and left behind cryptic notes about the battles in his basement.  Norton discovers these and dismisses them immediately, however, once Aleya ends up at his house one fateful day, Norton is then drug, reluctantly, into the battle.  Aleya explains to Norton how he is the Sentinel and the Guardian of the Gate.  He is hesitant of the fact, leery, and forced to take on this role that he tried so hard to allude after the fateful events overseas.

Combining his use of modernized weapons and Aleya's skillful warrior techniques, they form an incredible team against the Orcs that are attempting the takeover.  Joined by a blinded and vengeful Indian ally, Whitefeather (John Wesley), and country bumpkin Scooter (Maclain Nelson), the foursome battle the Orcs with weapons, traps, tanks, and anything else they can get their hands on.  The Orcs, however, retaliate themselves with the use of a dragon!

While this film is over the top, let's face it; everyone of us as a child has had a fascination with being a savior of sorts.  Whether it was pretending to be a Power Ranger, Teenage Mutant Ninja Turtle, or a scenario similar to this, we've had this indescribable idea of wanting to be the hero.  This film encompasses that idea and makes you feel warm inside as you reminisce about the times where you were battling evil-doers with plastic swords and imaginary fireballs.  It is a feel-good movie that is perfect to watch on a rainy day Sunday, for example.

If you can get over the cheesiness and the exaggerated story, this is a great movie to watch and feel entertained at the end of it.