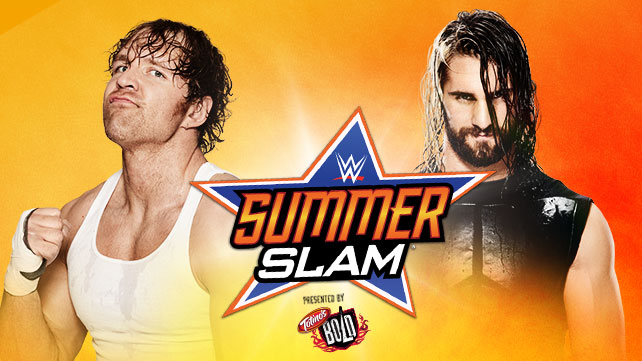 The match that will steal the show: Photo courtesy of WWE.com
SummerSlam is upon us and I feel a major change in the air coming with the August classic.  This will be a very short prediction write-up due to the lack of time I have to properly write this up.

Dean Ambrose vs. Seth Rollins in a Lumberjack Match

After months of Seth Rollins narrowly escaping the full ferocity of Dean Ambrose, the two will finally meet and be contained inside the ring, for the most part, in a Lumberjack Match, as chosen by Ambrose.  The Lunatic Fringe cost Mr. Money in the Bank an opportunity to name the stipulation for their match at SummerSlam by distracting Rollins in a one-on-one match against Heath Slater in the Beat the Clock Challenge a couple of weeks ago on Monday Night Raw.  Ambrose selected a match where the two of them cannot escape, even if they tried.  With Ambrose set to star in the new WWE film, "Lockdown" and production starting this month, I see either Ambrose picking up a huge redemption-like win this Sunday or getting severely beaten down by Rollins.  I chose the first option.

AJ Lee (C) vs. Paige for the Diva's Championship

The frenemies will finally do battle after weeks of curious storytelling, lack of action in the ring, and the most unthinkable:  Eva Marie pinning AJ Lee!  Paige has worked her heel tactics very well by injuring the champion and costing her easy wins that should have been picked up, however, I see the crafty veteran and the greatest Diva's champion of all-time teaching the youngster from England a thing or two about being a champion.  Enough "skipping" around my obvious pick for this match;

Jericho has vowing to get a little bit crazy with Bray Wyatt and after a surprising, at least to me, win against the leader of the Wyatt Family at Battleground, Jericho has been on a bit of a hot streak.  After defeating Erick Rowan and Luke Harper and banning them from ringside, we will finally see what Wyatt can do by himself in the ring.  I feel that after the fantastic promo the two shared on this past week's Monday Night Raw, the match will push the pace and up the intensity level much further than their previous battle.  Bray Wyatt, to regain his following and add some truth to his ramblings, needs this win against Y2J and I believe he gets it.

Swagger and Rusev had an impressive match at Battleground last month and Swagger made Rusev look vulnerable for once.  Although he fell short, Swagger had the Super Athlete on his toes for most of the match and got caught on the outside to lose by count-out.  The Bulgarian Brute will look to continue his dominance in the WWE and continue his winning streak, but I believe that it is finally time for Swagger to break out and come up with a monumental win, something that will boost him to main event level status like two years ago versus Alberto Del Rio.

The Miz (C) vs. Dolph Ziggler for the Intercontinental Championship

As much as I want to root for Ziggler and have the Show Off steal the show and become the new IC champ, I do not see it happening.  Reviving the Battle from Ohio rivalry, Miz and his "moneymaker" will smile bright at the end of the night as he maintains his championship, but do not be surprised if this match has the crowd on the edge of their seats from bell to bell.  Ziggler is one of the most entertaining personalities in WWE and will shine, but not bright enough.  Plus, the Miz is in his backyard:  Hollywood.

In arguably the most over-hyped match-up of the summer, Brie Bella-Bryan (right, we can do that?) will take on the Boss' Daughter, Stephanie McMahon.  In a match that stems from abuse from the Authority towards Bella's husband and former WWE World Heavyweight Champion Daniel Bryan and her quitting her job three months ago and now wanting it back, Bella and McMahon have gotten each other arrested, closed out Raw two weeks in a row, and have said the "B" word close to 10 times in about a month.  Stephanie was riding high at the end of Raw this past week, and I think she continues her hot streak by defeating Brie with some assistance from...Nikki Bella.  Don't be surprised if Cena's girlfriend turns heel this Sunday.

Similar to Rollins vs. Ambrose, this match has been brewing for months.  Reigns is looking for revenge on Orton from the several abusive beatings he's received over time.  Orton is looking to prove that he is still the Viper and still as venomous as ever.  Simply put, as much as WWE wants Reigns to be the next face of the company, he is not ready.  The real face of the WWE, Randy Orton will strike from out of nowhere and pick up a big win setting him up for his owed one-on-one World Heavyweight Championship shot from Wrestlemania.

Owen Hart said it best, "Enough is enough and it's time for a change!"  This Sunday, fans, rejoice because I feel that we will have said change.  Cena and Heyman have sparred off, trading excellent promos against one another and the video package done by WWE, although overplayed, is very well done.  It sets up the big-time feel of the match and I believe we will see an ugly, vicious brawl to close out SummerSlam.  Cena and Lesnar do not have technically perfect matches, nor do they put on boring ones.  The match, I believe, will be similar to their encounter two years ago; physical, violent, brutal and all other animalistic adjectives you can throw in there.