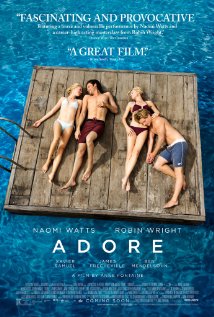 Lil (Naomi Watts) and Roz (Robin Wright) were best friends from an early age and continued their friendship throughout their adult lives.  Raising sons Ian (Xavier Samuel) and Tom (James Frecheville), respectively, have been their greatest accomplishments after failed marriages and lackluster love lives.  Over time, Lil and Tom along with Roz and Ian develop attractions to one another and form relationships that would make most cringe, but for these four who have grown up with each other all of their lives, there is nothing out of the ordinary.  Of course, that is after the initial shock of the budding relationships wears off.

With every love story, however, comes a heartbreak.  And with young hearts on the line, the hurt will last for a very long time.

Written and directed by Anne Fontaine, Adore is set against the beautiful, serene beaches of Australia and it wonderfully written for its subject matter.  It pushed the boundaries compared to the aforementioned films, however, it does not lack the sincerity and heartfelt performances from all involved.

Adore is an exceptional film about a subject that has not been explored too much within the history of film.  Adore can be instantly streamed on Netflix.