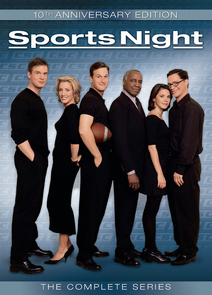 Sports Night was creator Aaron Sorkin's first venture into television in 1998.  Sorkin, who wrote the play that turned into the Tom Cruise/Jack Nicholson classic film, A Few Good Men, came up with a television series that was based off of ESPN's Sportscenter, but did not focus on the sport aspect throughout the show.  Rather, Sports Night took a look at the behind the scenes personal and professional relationships of the likeable personalities that worked at the third highest ranked sports show in the United States.

The dramedy starred several up and coming actors and actresses like Josh Charles (The Good Wife), Peter Krause (Parenthood), Felicity Huffman (Desperate Housewives), Joshua Malina (The West Wing) and Sabrina Lloyd (Ed).  The young crew was glued together by veteran actor Robert Guillaume (Benson).  This central crew of six navigated personal relationships, professional relationships, the highs and lows of each, and discovered the family they had become working at CSC.

When looking back on this show, it in a way revolutionized television and the way stories were told.  There was a quick, back-and-forth, witty conversations held with everyone that mirrored the fast-paced environment of the newsroom.  It was rare that we saw the actual show, rather, we saw the show being produced and how the anchors were writing the shows and what graphics, animations, sounds, etc. were going to be used.  It was frenetic and nail-biting, but the crew always pulled the show off.

The show also featured a different style at the time with a mix of comedy, but dramatic instances.  Throughout the first season, there are rare laugh tracks that pop up throughout various episodes, however in the second season, there was not one laugh track to be found.  The superb writing allows the audience to decide what witty one-liner is worth a laugh or a chuckle or just fell flat.  The writing never tried hard to be funny or overly-dramatic, which made it ten times more effective.
What's more impressive with the characters and their development is that everyone working on Sports Night is likeable.  Do some have their flaws and faults and annoying tendencies?  Yes, but who doesn't?  The crew all genuinely care for one another and will do everything in their power to make sure everyone is successful and more importantly, happy both personally and professionally.  Throughout their two year run, I can honestly say there was not one moment where I looked at any of these characters and said, "Man, I really cannot stand them!"  Not once.  Each character is written and developed in such a perfect way that you get lost watching the show and enjoy the bonds you see each and every episode.

The way Dan Rydell (Charles) and Casey McCall (Krause) would interact on and off set showed a true bond between broadcast partners and friends.  Dana Whitaker (Huffman) and Natalie Hurley (Lloyd) was the typical mentor-prodigy relationship, with the two working close together as producers on the show, but were girlfriends outside of the CSC building.  Jeremy Goodwin (Malina) was the over-anxious sports nerd that was hardly ever wrong about professional statistics, however, was never quite that smart when it came to personal relationships.  Lastly, Isaac Jaffe (Guillaume), the boss served more as a father figure to these talents, providing emotional support, but also dishing out hard truths and lessons to his crew.

I can simply say that all of the Sports Night episodes are must-see (and that is true), but a few that stand out for their tremendous storytelling are the following:

Although this title is not available to stream on Netflix, it cannot be more recommended.  It was revolutionary and cancelled all too soon.  There were plenty of stories left to be told and much more excellent television to be produced.  ABC decided to end the show in 2000 and the decision is arguably one of the worst that ABC has made in its most recent history.  Even 14 years after the show has been off the air, the lessons taught and the morals of the show still ring true today.  It was a magnificent launching pad for several careers and created a genre that is often imitated in today's television world.

Sports Night, unfortunately did not live up to ABC's expectations and was pulled after two seasons.  Had it run longer, who knows where it would rank in the all-time list of best shows, but I can say this with full confidence:

Sports Night is one of the greatest shows I've ever had the pleasure of taking in and experiencing.