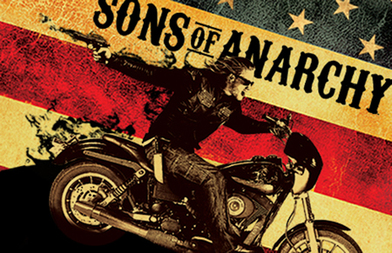 Poster for FX's biker drama
Sons of Anarchy, the FX original series that will be wrapping up this September is an absolute must see show.  Jax Teller and company lead SAMCRO (Sons of Anarchy Motorcycle Club Redwood Originals) as a band of lovable villains and hated heroes.  Does that make sense?  To put it like my boss and huge fan of the show has, the boys are like the "Stone Cold" Steve Austin of television characters.  You're not supposed to root for them, but you can't help but find yourself doing so.

The Sons dish out justice as they see fit with rival gangs like the Niners, the Mayans, and the Aryans.  Their problems do not end there, however.  The police forces in Charming are out to end the Sons' gun trading run, as well as in later seasons, their more illegal actions.  (No spoilers in this teaser).

External conflicts with rival gangs and the 5-0 as well as internal conflicts within the Sons and their conscience are reoccurring themes that get more and more interesting with every passing season.  Jax (Charlie Hunnam) is a character that is cliche in the way that "men want to be him and women want to be with him."  Along side his stepfather, Clay Morrow (Ron Perlman) and his mother, Gemma Teller-Morrow (Katey Sagal), familial drama is presented with every tense and engaging episode.

I wish I could go into this more, but I feel that even with a few more details, I could be spoiling the experience for you.  The show is built around its drama and surprises.

If you are a fan of dramatic storytelling, long, linear storylines, violence, romance and some dark comedy, then this show is made for you.

Folks, if you have a Sunday off, it's raining out, and you have not started this series, this is the perfect show to get lost in for several hours.  Netflix currently has the first five seasons streaming, with season six to be added around the tale end of summer.
*Editor's note: As of this edit, August 28, 2015, all seasons are now currently available on Netflix.*

Enjoy Sons of Anarchy on your next Netflix Marathon Day.

One tiny spoiler:  People die.  A LOT of people die.