July 27th, 2017
Riley and Jenai are a young American couple exploring Iceland on a vacation when suddenly, with a bright flash of white during the middle of the night, they find themselves as the only two people in the city the following morning.  In the country.  Possibly in the whole world.

​Bokeh examines the choices one would make when living in such an extreme aftermath where faith, trust and love are tested to their fullest.

The title of the film is a term used in photography to describe the items out of focus in a photo.  The blurry areas, if you will, and it is a perfect metaphor for this sci-fi/drama/romance that begs one to investigate further and delve deeper than to just accept what's clear on the surface.

Riley, played by Matt O'Leary, can be regarded as the optimistic one of the duo.  He sees opportunity to build and thrive with the unlimited natural resources at their disposal.  Riley is more of an idealist, a lover and explorer.  Jenai, played by Maika Monroe, is more grounded and practical.  Her realization of the enormity of the situation overwhelms and consumes her thoughts.  She wonders where the people have gone and whether or not God has abandoned them, maybe even putting them to through a test.

The two start the film deeply in love with not a care in the world.  There is a genuine connection between the two.  Riley often snaps candid pictures of Jenai interacting with the breathtaking landscape and Jenai proudly obliges.  They share the same love for coffee and animals and the dialogue between the two characters is completely real and authentic.

As the story progresses over several months, tension arises between the two young lovers and their ideas about their given circumstance.  There has been no sign of hope until they reach a quiet countryside cabin off of a river where they discover they are not alone.  An epiphanic conversation with the elderly gentleman sets the final fifteen minutes into motion with a shocking ending that will leave an indelible mark on the audience. 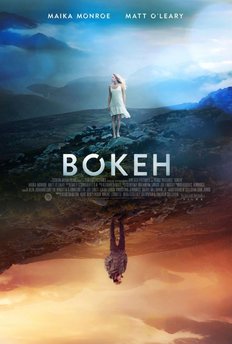 Photo courtesy of imdb.com
To follow along with the cinematography, the music creates an excellent atmosphere that furthers the mystery of what actually transpired to leave these two alone.

While I feel that there are way more positives than negatives with this film, there still are a handful of questionable decisions that were made.

For instance, within the first ten minutes, they are alone.  The bright flash that Jenai sees in the middle of the night sweeps across the sleeping town and we are immediately thrown into the fold.  I felt that even if they built up the reveal for maybe ten or fifteen minutes later into the film, there would have been a bigger curiosity and less of the two alone together.

Tying into the last point, while I thoroughly did enjoy and believe the chemistry that the characters had, it was drawn out quite a bit and stretched thin until the cabin scene.  I appreciate a small cast and character-driven story, but Bokeh seemed to drag the relationship out a bit too much while still throwing in very emotional scenes.  The scenes served their purpose, but like the aforementioned point, had they been built up a bit more, I feel the emotion would have been greater.

Lastly, and I'm going to try to stay away from spoiler territory here, but the ending didn't make much sense to me upon initial viewing.  Jenai and Riley were rebounding from their last argument, however, Jenai decided to go out for the day without letting Riley know.  Once he tries to track her down, he realizes that she's lost and he is alone.  My issue with the ending at the time was that it seemed--and boy is this hard to try and say without spoiling anything--unnecessary.

It was wonderfully shot and pulled off and I do get it now as to why the choice was made to end the film like that.  Sitting on it after a couple of hours and the next day, I couldn't help but nod in appreciation for the decision to end the film like that.  It ties back into the title and its meaning perfectly, but upon initial viewing, I was not a fan and I feel that many who do watch this film will feel a similar issue just as the credits begin to roll.
A lot of people online are not in favor of this film.  They find it slow, boring, etc.  I disagree completely.  I feel that films that require you to think are misconstrued and immediately shot down because they make the audience work a bit.  There are no explosions, there's no sex scene, there's no real payoff, to be honest, but the film makes one question what they would do in that situation.  How would they handle the relationship, not even in terms of romantically, but getting along with one person for the rest of the foreseeable future?

I felt Bokeh was a breathtakingly beautiful film from start to finish with an ambitious, ambiguous story carried by two very talented young actors that deserve a bright future, unlike the bleak world that they inhabited for several months.