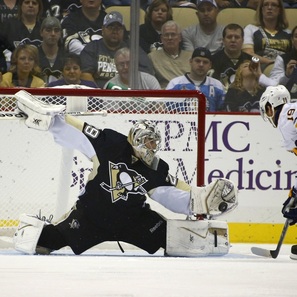 It was announced today that the Pittsburgh Penguins have come to terms with Marc-Andre Fleury on a four-year, $23 million dollar contact extension.  It breaks down to an annual average of $5.75 million per year.

Fleury, who holds several Penguins' goaltending records, is tied for second in wins (7) and is tied for the league lead in shutouts (3) this season.  He was named the NHL's "Third Star of the Week" last week as he posted a 3-0-0 records with a 1.00 GAA and two shutouts.  He currently holds a shutout streak of 134:46 as the Penguins head into Winnipeg this Thursday.

The Sorel, Quebec native is the longest tenured Penguin on the team, dating back to his debut in October of 2003.  He is the winningest goaltender of the last seven years, picking up 219 victories over that time span.

Marc-Andre Fleury has had some playoff issues that have made those around the league and fans of the team skeptical about the charismatic netminder, however, one cannot argue with his success.  He backstopped the Penguins to back-to-back Stanley Cup Finals in 2008 and 2009, ultimately hoisting Lord Stanley's Cup in the latter.  Fleury was also part of the gold medal winning Team Canada in the 2010.

For a full press release regarding the deal, click here to read the Official Pittsburgh Penguins release.

Marc-Andre Fleury is the only goaltender for the Pittsburgh Penguins, in my humble opinion.  While it was tough to see other players leave at the end of their contracts such as Maxime Talbot, Ryan Malone, Rob Scuderi, Colby Armstrong, and most recently Brooks Orpik, Fleury is truly a building block piece that without him in the early 2000's, dare I say the Penguins do not become the juggernaut that they have over the last several years.

Aside from Fleury's success on the ice, which has been amplified in the last two seasons, he is clearly a fan favorite in Pittsburgh.  His funny antics and support for other Pittsburgh squads (Steelers helmet) has endeared him to the Yinzers in the Burgh.  Any time he is on the microphone is entertaining, especially when he tries, in his French-Canadian accent to say "rivalry" which comes out sounding like "revolvary".  He is an absolute character and we as Penguins fans love that about him.

What the next four years have in store the Pittsburgh Penguins, I'm not sure.  Having Fleury in net though eases my mind for the rest of the season.  The story goes that a netminder hits their peak in their 30's.  Fleury is currently 29 and has been playing some of his best hockey in the last three seasons.  If this trend continues, I cannot wait to see what kind of numbers Fleury puts up in the next several years.

To four more years of Fleury....and the inevitable complaining that will follow after less than picture perfect performances.
Photos courtesy of their respective providers through Google.com