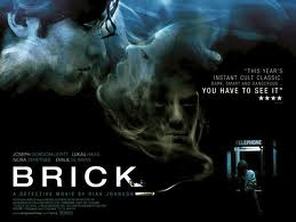 Poster for Rian Johnson's 2005 debut film, Brick
I have seen hundreds of movies in my lifetime.  Some are classics that will stand the test of time.  Others are horribly written, directed, and acted films that will stand the test of time for those reasons alone (Thankskilling anyone?).  The following movie is a movie that has deeply affected me as a viewer and as a person in general.  Rian Johnson's debut film, Brick, is one of those films that I consider a classic.  This review may seem bias as it is my favorite film of all-time, bar none, but personal opinion aside, this indie-drama/noir/thriller is a film that should not be overlooked.

Brick is unlike any movie of recent memory.  It has the nostalgic, gritty flair of The Maltese Falcon, but is set in a current day San Clemente high school.  The nuances of film noir are evident through the dialogue, the lighting, the camera shots and the stereotypes of the genre.  There is the hardened, loner hero Brendan Frye (Joseph Gordon-Levitt), the ominous, mysterious villain The Pin (Lukas Haas), his muscle bound security Tug (Noah Fleiss) and the dame that knows how to play the game Laura (Nora Zehetner).

The film starts out when Brendan receives a note in his locker with an address and a time written on the paper.  Upon arriving at said destination, Brendan engages in a phone call that sets the movie in motion.  His ex-girlfriend, Emily Kostich (Emilie de Ravin), has asked for his help with a botched deal she had with the town's drug peddlers.  They are after her for her faults with the bricks of heroin that their operation runs.  In an effort to help his former lover, Brendan asks for the assistance of his best friend, Brain (Matt O'Leary).  The two set off together to find out why, and who wants Emily Kostich dead.

Along the twisting road of deceits and colorful characters like "drama vamp" Kara (Meagan Good) and school druggie Dode (Noah Segan), Brendan gets deep within the drug underbelly, while maintaining his unwanted position as the school's go-between for criminal activity involving its students.

The thrilling conclusion provides answers and clarity, but also hints at other mysteries surrounding these characters that one can empathize with in one fashion or another.   Gordon-Levitt's acting is astounding and honestly, one of his best performances.  Lukas Haas and Noah Fleiss have a magnetic chemistry, while Noah Segan really steals the film with the Dode character.  Nora Zehetner and Meagan Good's female roles could not have been more perfectly cast while de Ravin's character is only on screen for a short time, her presence in the film sticks with you for a long time afterward.

The story is elaborate and engaging.  It is a thriller that does not let up for one instance with its palpable tension.  It is a love story, a drama, a dark comedy at times.  The film has it all and executes on all elements perfectly.  This is a must see, immediately.