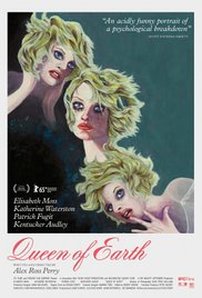 I must start this Netflix Pix selection off by saying, wow.  Simply.  Wow.

Queen of Earth, written and directed by Alex Ross Perry, focuses on Catherine (Elisabeth Moss) and Virginia (Katherine Waterston), two friends who have emotionally grown distant from the outside world, but also themselves.

The film centers around emotional isolation, devastating pain, a sense of loss, along with blatant selfishness and very little humility.  The characters in the film are polarizing.  You either gravitate to them or stay as far away from them as possible; there's no blurred lines in terms of connectivity to these characters.

The film starts out with a distraught Catherine listening and attempting to understand her boyfriend's confessions.  This stress, topped on to the fact that her idol father had recently committed suicide, forces Catherine to retreat to Virginia's family's waterfront vacation home for a week to clear her head and be alone.

For the next week, tensions are abound between the two friends as neighbor Rich (Patrick Fugit) continuously drops in and creates a sense of unease for Catherine.  The two's disconnect plays out fully to one of the better moments in the film, later on when Catherine goes on a monologue that does not hold back any punches.  And it's phenomenal.

Attempting to reinvigorate her artistic side, Catherine also sketches Virginia and the ultimate reveal will leave the viewer guessing at the end of the film.

This 2015 psychological thriller is absolutely terrifying to me.  The fact that a build-up of unfortunate events could create this psychic torment and anguish is astounding.  The tip-toeing that Moss' character takes on the line of sane and insane is done perfectly and her performance is one of the best I've truly seen in quite some time.  She certainly will not make you think about Mad Men after the hour and a half runtime.

Waterston does an exceptional job as well, creating a sympathy for Virginia as well as empathy as she attempts to be the friend that Catherine was not to her a year previous.  Her eerie mannerisms create even more of a chilling factor to this film.

Fugit plays the perfect prick.  Rude, insensitive, and condescending and it is very entertaining.  He does break up the pure intensity of the film which is relieving at times.

Perry's direction is wonderful.  He creates an atmosphere that is dream-like with the natural light and environment that the house is surrounded by.

The pacing of the film is slow and by slow, I mean sloth-like.  It is a very slow burn, do not be mistaken by the action in the trailer.  The eroding of Catherine and Virginia's friendship and their sanity takes time and truthfully, does not pay off in the way I thought it would.  While the ending is good, it still leaves some questions in the air.

Lastly, I leave with my favorite part of the film.  If you watched the trailer, the moment where Catherine utters, almost playfully, "You know, I could murder you right now and no one would even know," is one of the creepiest and downright frightful moments I've seen.  If you have not watched the trailer, do so and then watch the movie to get the proper context.  Terrifying.

Queen of Earth is currently available to be streamed on Netflix and if you're looking for a brilliantly written and fantastically acted film, I highly recommend this work of art.