Money In The Bank Predictions 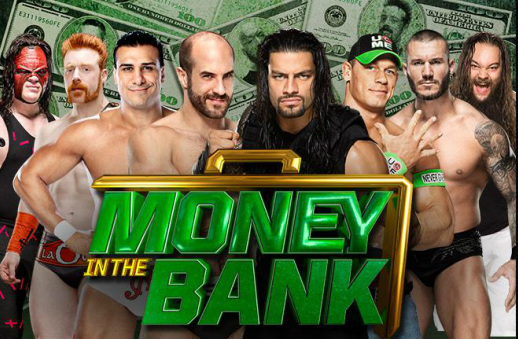 Money In The Bank is arguably the most exciting pay-per-view the WWE offers throughout the calendar year and with this year's installment, it is safe to say that this will be one of the most important pay-per-views of this year.

With Daniel Bryan being stripped of the WWE World Heavyweight Championship due to his neck injury, eight of the WWE's best will be fighting for the coveted belt and to be the face of the company.

Aside from those eight, another eight hungry talents will be reaching for the Money In The Bank briefcase, guaranteeing the superstar a shot at the WWE World Heavyweight Championship any time they would like to cash in.

Rusev has been unstoppable since debuting at the Royal Rumble.  He has taken out the likes of Xavier Woods, R-Truth, Zack Ryder, and many other jobbers, building up his dominant persona.  His association with the Ravishing Russian Lana, the two make the ultimate heel for fans to boo against, proclaiming Russia's superiority over the United States of America.

Big E has remained quiet, competitively speaking since losing the Intercontinental Championship.  He plans to stop the Super Athlete Rusev this Sunday by delivering a Big Ending to Rusev's undefeated streak in WWE.

However, Rusev, but more importantly Lana, will have other plans.  These two men are big, fast, strong, and freakishly athletic for their size and will put on a decent match, showcasing each other's strengths, but I see Rusev keeping his streak intact.

It is no secret how this feud started, but a quick recap if I may.  Fandango broke up with Summer Rae over Twitter (manly thing to do), chose Layla as his new "dance partner" and Summer Rae became incredibly jealous.  Since the break-up, she has attacked Layla and played mindgames with Fandango ever since.  Now, that the soap opera has taken place, let's get to the match.

I, unlike a majority of wrestling fans on Twitter, believe Summer Rae is a future Divas Champion and possesses strong in-ring abilities.  Layla is no slouch herself when it comes to squared circle.  There will be a lot of hair pulling, rolling round, slamming each others' head in the mat, and other cliched moves we see in Divas matches.  Ultimately, this will be slotted between two big matches and receive a dead reaction from the crowd, but there will be some comedic, cheesy elements to the whole match.

I see Fandango realizing he left a great thing behind and will be reunited with Summer Rae, humiliating Layla.  Or, it will be a no-contest, but I'm sticking with my first thought.

Paige (C) vs. Naomi for the Divas Championship

Over the last several weeks, we have seen Paige battle both Naomi and Cameron.  The Funkadactyls are starting to unravel at the seams and Cameron's jealousy of both superior divas has caused that seam to just about tear wide open.  Naomi picked up a win against Paige two weeks ago and put her in contention for a shot at the title versus the 21 year old rookie.

Paige is by far the most talented diva on the roster and is rightfully holding the championship.  Her reign has not been all that special, but considering the quality of matches she has had, they have been better than most recent divas bouts, especially since AJ Lee's title reign.

Goldust and Stardust vs. RybAxel

This feud seems to have been going on forever and will hopefully come to an end tomorrow night at Money In The Bank.  The recent transformation of Cody Rhodes into Stardust seemed to be a comedic act at first, but is clearly over with the crowd.  The Rhodes Brothers, now the Dust Brothers if you will, have great chemistry in the ring and a new, revitalized energy as a tag team.

RybAxel were thrown together as two floundering talents months ago who have formed a rather successful tag team in the last month or two.  The combination of Ryback's brute strength with Curtis Axel's speed and agility have made them a force to be reckoned with.

The two teams put on great matches with not a lot of flash, but one can expect a bit more from the Dust Brothers side.  Stardust will continue his roll and pick up the victory for the team in black and gold.

Winner: Goldust and Stardust (Stardust with the pinfall victory)

The Usos (C) vs. The Wyatt Family for the WWE Tag Team Championship

The Usos are undeniably entertaining with their high flying arsenal of maneuvers, energetic entrance and constant energy as they fly around the ring, full speed at all times.  They have no fear of risking their bodies for the victory and are not scared of the taller men on the other side of the ring.

Now, the Wyatt Family is almost the exact opposite.  They are slower, more mechanical in their deliberate, vicious offense.  You will not see Luke Harper or Erick Rowan climbing to the top rope, ever.  They like their fights on the canvas; they like to rough it up with elbows and boots.  They are simply monsters, two intimidating towers of men in the squared circle.

The two teams have traded victories among each other singles competition, but as tag teams, this match may be one to steal the show.  I truly believe that Luke Harper is the best part of the Wyatt Family and will have another outstanding performance as he leads the Wyatt Family to tag team gold. 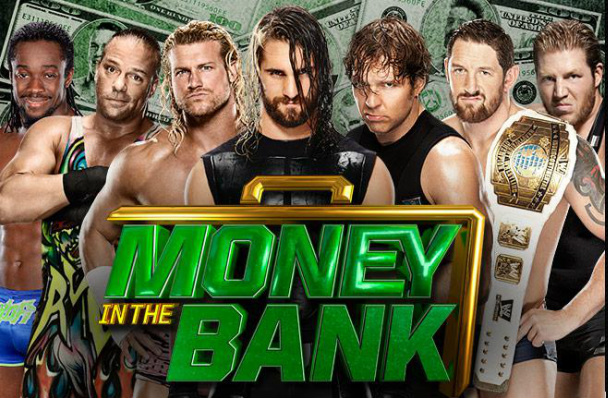 Essentially, this is the battle of superstars who did not win their original qualifying match to partake in the Money In The Bank ladder match for the WWE World Heavyweight Championship.  Aside from Seth Rollins and Dean Ambrose, the other five participants have not been featured or showcased enough for this match.  RVD lost to Seth Rollins on RAW this past week.  Bad News Barrett separated his shoulder in a post match scrum with Jack Swagger (typical Swags) following a loss to Dean Ambrose this past Friday on Smackdown.  Kofi Kingston had one promo commenting on how he would win the contract and other than that....the whole match has centered around the rivalry between Dean Ambrose and Seth Rollins.

Ambrose wants his revenge on Seth Rollins for betraying The Shield a month back.  Not originally in the match up, Ambrose threatened Triple H that he would show up to the PPV and ruin it by taking the briefcase anyway.  Fearful of Ambrose's proposition, Rollins begged Triple H to allow Ambrose into the match so he could keep an eye on him.  Will his strategy pay off?  I don't believe so.

I think that this match will be the most entertaining one of the night and with Dolph Ziggler, RVD and Seth Rollins as the bumping machines they are, there are bound to be some hellacious falls and moves taking place off of those ladders.

All in all, I still believe in The Shield and I believe in Dean Ambrose.

Money In The Bank Ladder Match for the vacant WWE World Heavyweight Championship
Bray Wyatt vs. Cesaro vs. Alberto Del Rio vs. Sheamus vs. Kane vs. John Cena vs. Roman Reigns vs. Randy Orton

This match is a bit more in-depth in terms of predictions.  Everyone has had a rivalry with everyone, so there are no apparent favorites there.  The recent 4-on-3, heel vs. babyface handicap matches as of late were essentially split.  The fan favorites like John Cena and Sheamus will get their opportunities just as the Internet Fan Favorites will like Bray Wyatt, Cesaro and Roman Reigns.  Del Rio and Kane are merely competitors in the match; the chances of them winning are slim to none.

If TV is an indication of anything, Roman Reigns will be the winner of the match with his incredible hot streak closing out RAW and Smackdown the last two weeks.  It would be too incredibly easy for one to pick Reigns, however, I'm rooting for a solid, main event worthy performance in the ladder match.

If the point is to have a heel win the belt and have Daniel Bryan immediately win it back once he's healthy, then I could see Kane winning due to their past rivalry.  Cesaro, who WWE has attempted creating into a heel with his association with Paul Heyman, would be an extraordinary opponent for Bryan.  The Internet would explode finally seeing Danielson vs. Castignoli on WWE programming.

Alas, I fear there is only one true winner in this match and I hate to type it, but I must.

Along with millions of other wrestling fans, we are sick of seeing SuperCena pick up the ball and run with it; time for some new talent (Wyatt, Cesaro, Reigns) to carry the WWE.  However, he has been reliable as a champion 14 previous times.  I see the Cenation leader raising the belts for his 15th time this Sunday when all is said and done and believe me John, I wish I couldn't see you doing that.

Who I Want To Win: Roman Reigns
Who I Think Will Win: John Cena