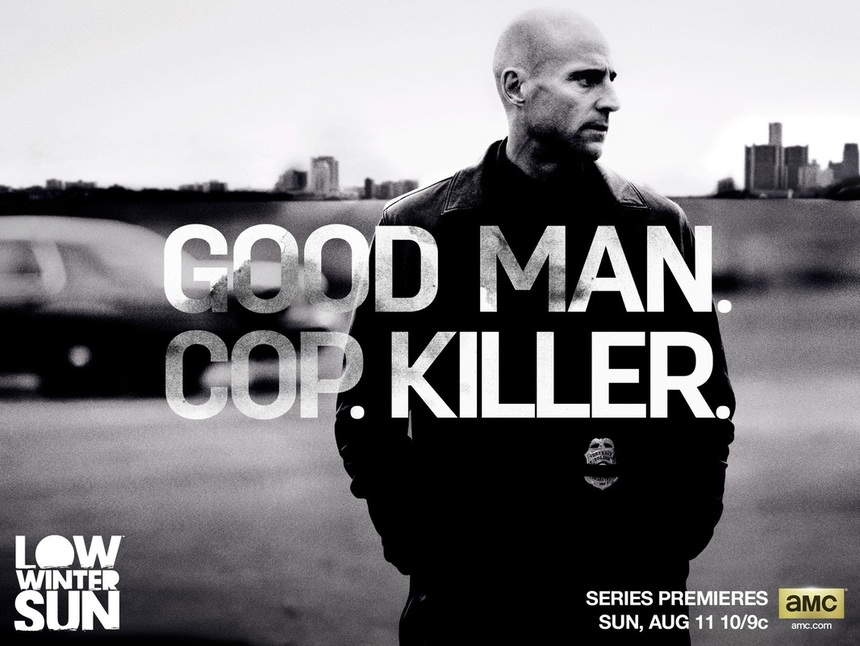 In 2013, AMC premiered the American version of a popular British television drama, Low Winter Sun.  The wonderfully assembled cast, led by Mark Strong, Lennie James, and James Ransone portrayed the negative aspects of living in Detroit, Michigan and the police corruption that spread throughout the city.

On the other hand, two rival gangs fought for prosperity, territory, and most importantly on the streets, respect.

The 10 episode drama that was cancelled after its lone season mainly revolved around the story of Detectives Frank Agnew (Strong) and Joe Geddes (James) after they did the unthinkable: kill one of their own.  As the body of dirty cop Brendan McCann is found, Agnew and Geddes are assigned their own crime and must cover up their hideous actions and betrayal before anyone else can crack the case.

Meanwhile, up and coming Greek gangster Damon Callis (Ransone) continues to look for ways to provide for his wife and crew, all while attempting to please Greek crime lord, Alexander Skelos and avoid any further issues with rival black gang led by Reverend Lowdown.

As paranoia and a determined rookie cop threaten to expose Agnew and Geddes, their partnership and trust is tested to the breaking point.  Violence and turf wars pop up in Detroit, leading to more deaths and more bad blood as Callis attempts to become the next big time player.

Lost prostitutes, staged killings, police corruption and a whole host of lies, deceit, and mistrust only crack the surface of this engaging, thrilling, and edge-of-your-seat exciting show that fully deserved to have another season.

Low Winter Sun is dark and dirty, let's get that clear.  There's not much to smile about with this show.  There are some great one-liners, but in no shape or form is this a comedy.  It's a film noir, mixed with a thriller, and of course, has its action elements.  Dramatic, rich in storytelling, and phenomenal character building, this is one of the better television shows I've seen in a long time.

The acting is phenomenal and cannot be overstated on how good it is.  Strong and James play off of one another fantastically and the supporting cast delivers.  The pacing of the story is excellent and leaves you desiring more every episode, yet paying off every episode with an answer to a pivotal question or scenario.  The cliffhangers at the end of every episode are well done and set up the next episode perfectly.

I sat through this series in two viewings, five episodes at a time.  I had to fight the urge to watch them all at once.  I dare you to spread out the viewings as well.  Low Winter Sun, for 10 episodes, told a complex morality story and told it spectacularly.  A must-watch.