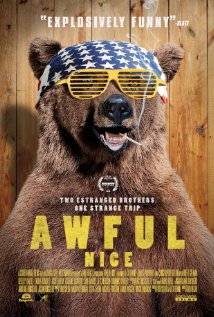 Photo courtesy of IMDb.com
When their father dies, brothers Dave and Jim set out to collect their inheritance and do some bonding along the way.  Their father left behind their childhood lakehouse and Dave and Jim are looking to get some money out of it.  Unfortunately for these two totally opposite brothers, things do not always run smoothly.

Awful Nice is a ludicrous comedy in the same vain as It's Always Sunny in Philadelphia in the terms of its quick reeling off of jokes, the lack of self-appreciation and absurdity of the storyline.  Dave (Alex Rennie) would be comparable to Charlie Day; the uneducated misfit that is trying to fit in as best he can despite his disadvantages.  Jim (James Pumphrey) is the more down-to-earth, "mature" brother attempting to bond with Dave and right his wrongs and help Dave get out of the problems he continuously falls into.

With punchline after punchline in dialogue that seems unscripted, Awful Nice paints a hysterical, yet realistic and somewhat dramatic film about the down and out brother attempting to cope with the fact that he has not lived up to his family's standards or his own expectations.  It depicts the ups and downs brothers, who are ultimately competitive, face when trying to reconcile for the past and accept who they have become in their adult years.

Hysterical guest cameos by Law and Order: SVU's Christopher Meloni and Eagleheart's Brett Gelman, Awful Nice is certainly worth the one hour and thirty-two minutes that it'll take to experience this over-the-top, gut-busting, laugh-out-loud comedy currently streaming on Netflix.