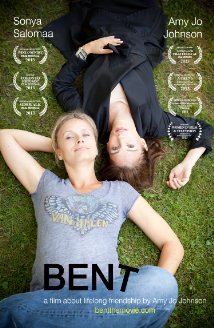 Image courtesy of IMDb.com
Amy Jo Johnson's directorial debut with her short film, Bent, is a brilliantly written and directed piece about two friends and their lifelong friendship through all of their ups and downs.  Johnson wrote, directed and starred in the 20 minute short film based off of her longer screenplay, Crazier Than You.  The film is also an homage and tribute to Johnson's mother, Christine Johnson, who passed away due to cancer.

Jackie (Sonya Salomaa) and Amelia (Johnson), two friends in their late 30's, meet up every year at Amelia's mother's grave and reminisce about the past, where they currently are, and what the future holds for them.  The two share stories about their upbringing through a religious cult, secrets they have never told anyone before, and ways to cope with the stress of growing up and tragedies faced throughout their lifetimes.

The film certainly has a dramatic feel to it, but the comedy infused is refreshing and enlightening throughout the film; a short that could be categorized as a "dramedy."  Think of this film in a similar category as Garden State.

Jackie begins the film by sneaking out of her house that she shares with her husband to meet up with Amelia, however, she does not have a car to make it to the graveyard.  While trying to hitch a ride, she comes across a former friend, Jane (Ingrid Kavelaars).  In a hysterical, yet brief, condescending, and demeaning conversation, Jane ultimately passes by her pregnant acquaintance and continues on her way, leaving Jackie to continue to walk towards the annual meeting spot.

Salomaa and Johnson have a wonderful chemistry on-screen which gives this piece an absolutely authentic feel to it, as if they were ad-libbing lines throughout.  There is a genuine feeling with these characters and not one line or action feels forced.  The writing and directing is spot-on and the story, while shortened, is easy to follow and an enjoyable ride.

Being Johnson's debut film, the precise angles of the shots, interesting story that leaves more to be desired, and excellent acting from everyone involved, leaves us fans wanting more from such a talented performer, whether she be acting, singing, or directing.  With multiple projects lined up, Johnson's directorial career is bound to be a hit based off of this fantastic, semi-biographical short that can be streamed on Vimeo.