"WHERE DOES HE GO AT NIGHT?"  DONNIE DARKO: 10 YEARS LATER

This is a piece I wrote about Donnie Darko in 2011.  The article chronicles the impact Richard Kelly's debut film has had on society.  It was a piece that I took great pride in while writing for my university's school paper.  So, without further adieu, my piece on one of my favorite films of all-time, Donnie Darko. 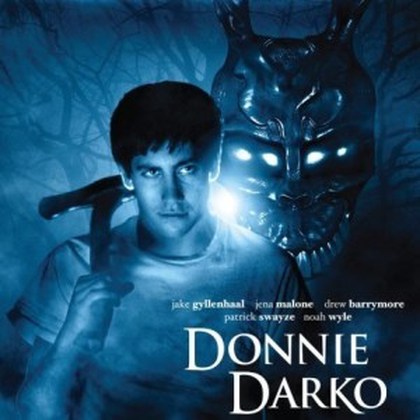 The film Donnie Darko was introduced to the world shortly after the terrorist attacks on Sept. 11, 2001. Due to that tragedy, it did not receive the critical acclaim and popularity it deserved back in the day.

Richard Kelly’s debut film at age 26 garnered tremendous positive feedback from underground movie goers, but for those looking for signs of hope and movies with no dark overtones or messages, “Donnie Darko” was not their cup of tea. No one wanted to watch a movie about an apocalypse, especially revolving around a plane after such real-world, heinous attacks.

The movie (which was executive produced by Drew Barrymore, who also starred in the film), did not hit it big until it was released on DVD in the States. In England, however, the popularity of the film and it’s hit single, “Mad World,” a cover from the Tears For Fears song done by Gary Jules, were immeasurable. The single was No.1  on the UK charts for the whole month of Oct. 2001.

Why Are You Wearing That Stupid Bunny Suit?

The main premise, for those who haven’t seen it, is that troubled teen Donnie Darko is visited by a six foot tall rabbit named Frank. Frank tells Donnie that in “twenty-eight days, six hours, forty-two minutes, twelve seconds” that the world will end, conveniently enough on Halloween. Donnie then challenges his school and its principles, takes on a child porn-watching inspirational speaker, and goes to therapy for his paranoia and schizophrenia. Though, in the end, Donnie saves the world.

Why Are You Wearing That Stupid Mansuit?

The story of Donnie Darko is relatively simple, if you look at it from a teenage boy’s point of view. He is confused and angry at things he does not have the answer to. Donnie is scared, like all teenagers, about where he fits in this mad world, pun intended.

If you look at it for it’s scientific glory, you’ll be introduced to wormholes, portals, time travel, tangent universes, living receivers, etc. Being a fan of this film for this reason takes serious dedication, time, and commitment that deserves significant kudos.

The more you view this film, the more you realize that once you take out the bunny, the absurdity of the situation and the high school drama and yes, there’s plenty of it, you realize that this film is a study on life and existence. It’s a movie that will have you thinking for a long time after viewing it several times.

Have You Ever Seen A Portal?

This past Tuesday, the ten year anniversary Blu-Ray DVD was released, featuring the two main characters on the cover, Donnie and Frank. This is the first time in the multiple releases that those two are featured on the front, besides the original where Frank’s head is outlined and filled in by the film’s content. The four-disc DVD contains both the theatrical release and the director’s cut with commentary, special features like a production diary, “They Made Me Do It Too-The Cult of Donnie Darko,” and a digital copy. Listed $25, you are not going to find a better deal than this.

Donnie Darko is a movie about a dark teen trying to find himself, yes, but it was also a lot like the television show, Lost; a production making the viewer and fan think about life and lessons learned. When one hears the chilling piano chords to “Mad World,” it proves that this movie affected them.

And as my fingers hit the keys and these ears listen to Donnie say, “Dear Roberta Sparrow, I have reached the end of your book and… there are so many things that I need to ask you. Sometimes I’m afraid of what you might tell me. Sometimes I’m afraid that you’ll tell me that this is not a work of fiction. I can only hope that the answers will come to me in my sleep. I hope that when the world comes to an end, I can breathe a sigh of relief, because there will be so much to look forward to,” one can only say the same thing about the growing legend that is Donnie Darko.