​Available on Hulu, Amazon Prime and iTunes.  DVD can be purchased here.
June 8, 2018
The Dust Storm is a romantic drama written by Ryan Lacen, who also co-directed film alongside Anthony Baldino, set in Nashville, Tennessee that centers around Brennan and Nora.  The two have not spoken to each other in several years and, by fate, are in the Music City at the same time on the same weekend.  Brennan, after attending a seminar for a company he dreads working for, finds himself in a local park listening to music and reminiscing about the days where he graced the stage.  Nora, after a fight with her fiancé on a weekend getaway, storms away and serendipitously finds her way to the same park where Brennan is located.

After their brief, awkward reintroductions, Nora invites Brennan for a drink to kickoff their next three days where, fueled by copious amounts of alcohol, their past relationship is reevaluated, feelings return and the two attempt to find themselves. 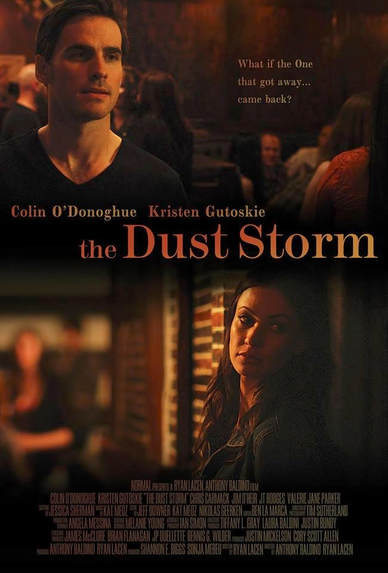 Photo courtesy of imdb.com
The two's chemistry was everything you'd expect from former lovers who hadn't seen each other in over seven years.  There were some jagged moments where the two would wear thin on one another, yet they still could know what the other was thinking with just a look. They still remembered who they fell in love with years ago, but knew that they were not the same people.  It was fantastic to watch those contradictions play out and develop.

Gutoskie, to me, was the star of the film.  She was incredibly humorous, ferocious when needed, but also vulnerable and gentle.  She was so believable in every line of dialogue she presented and her acting seemed so natural, I at times forgot I was watching a fictional character.  I kept wishing Nora was real and out there.

I can't shake the pool scene towards the end of the film out of my head.  It is a powerful couple of minutes, not only with the lines said, but how they're delivered.  The build up to that scene is taxing and watching Nora become vulnerable gets you as a viewer.  Gutoskie pulls at the heart strings with her confession and subsequent request for Brennan.  I've watched a great deal of film in my years and I can honestly, wholeheartedly say that the pool scene is one of the most emotional I've viewed.  It hit me hard and I've rewatched it several times with the same feeling.  A true highlight of the film.

While I praise Gutoskie to the nth degree, O'Donoghue was stellar in his role, especially with his tone and cadence in the delivery of his lines.  It was very easy to believe in every line he said with his accompanying facials.

The moments that these two share, wandering through the beautiful city of Nashville, vary from hilariously comedic to drop dead serious and everything in between.  It hits on every angle the two could have explored in their short reunion.
​
While I feel the film is excellent, there are certainly some flaws.

I felt the side characters were not strong in the film.  Nora's boyfriend/fiancé, David, had a very tiny, almost inconsequential role in the film along with Brennan's co-worker Steve and bar patron, Roy.  Throw in The Girl (yes, real character name) in that mix, too.  They served their purpose, sure, but I felt that they could have been fleshed out.  A little more backstory on David at the very least.

​This is simply nitpicking, but the bridge scene where Brennan can't contain himself felt too short.  Without spoiling too much, the two have their first heated moment and I feel that it ramps up very quick and then dies down just as fast.  I would have loved to have seen more of Brennan's pent up feelings vocalized.  When you watch the scene, you can absolutely tell there was much more he wanted to say, but he had to toe the line and ensure that Nora wouldn't leave him high and dry.  It's a scene that I felt, if given another one-to-two minutes, could have provided so much more emotion to these characters and backstory.

Lastly, I know that the ending will piss a lot of people off, and I must admit, I was a little upset.  Don't get me wrong: I love the bittersweet ending more than anyone, but I feel it was clipped just a tad too soon.  Flashing between two different points in time, the very last shot left just one action to be desired.  A clap, a cheer, a kiss; something.  Again, a very selfish want and nitpicky.  With all of that said, however, I did enjoy, respect and appreciate the ending, but for once I wanted a happier version for the couple I grew attached to for the last hour and a half.
Aside from a few selfish critiques, I adored The Dust Storm.  It has wonderful leads who put on fantastic performances.  The journey of their reconnection is executed well and coherently, despite their sometimes incoherent states of mind.  Nora is one of my favorite female characters I've seen in film and will be a tough one to top.  There is a perfect blend of comedy and drama, words and silence to further the story and you can't ignore the great soundtrack.  I feel if this movie were about seven-to-10 minutes longer with more dialogue delving deeper into Brennan and Nora's backstory and maybe one more tense, but tender moment, that this would have been perfect.

All in all, I'm a huge fan of this film and will revisit it often.