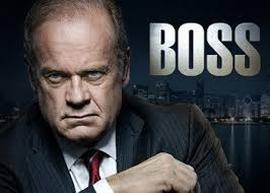 Poster for the Starz political drama
Netflix has just received a boost in quality programming as soon as it added Starz's now cancelled series Boss.

Boss is a political drama that focuses on Chicago's long time mayor, Tom Kane played by Kelsey Grammer.  Kane is plagued with a debilitating mental disorder called Lewy Body Dementia.  As he struggles with his health, Kane also struggles to maintain his power over the city he helped mold and build back to prominence.

Kelsey Grammer gives what is arguably his best performances ever as Tom Kane, who is the polar opposite of his most recognized and beloved character, Seattle's favorite psychiatrist, Dr. Frasier Crane.  He is cunning, ruthless, and despicable, but vulnerable and ultimately, doing what needs to be done to survive.

The show premiered in 2011 and was cancelled in 2012 after two critically acclaimed seasons.  The series lacked viewership due to a poor time slot and marketing campaign.  The series finale left plenty of cliffhangers that kept fans on the edge of their seats and to this day, there have been no answers provided.  There had been rumors of a two-hour movie to wrap up the series, however, as of today, no current news has been reported about the likelihood of that occurring.

Boss is a series that could arguably be called the predecessor to Netflix's hit original series, House of Cards, which has some glaring similarities.  If you're a fan of political dramas, Kelsey Grammer, great television, or any/all of the above, I simply cannot recommend Boss enough.  It is one of the greatest television programs I have ever had the pleasure of viewing and following.