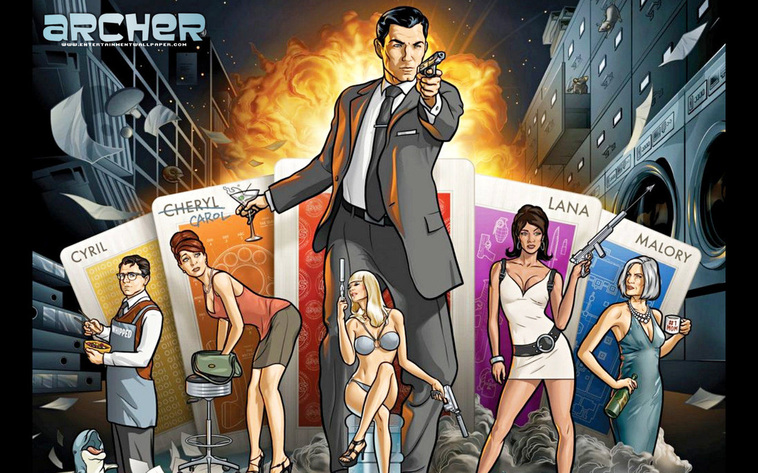 The FX original comedy Archer is a simple story about the world's best secret agent and how he thwarts evil doers every episode, combined with hysterical comedic bits from his co-workers.

His mother, Mallory, is the head of the secret agency, which was originally named ISIS, but due to real world current events, the name had to be changed.  Mallory is a possessive and cold-hearted woman who loves her alcohol, but deep down love her Archer more.  She won't outright admit it, but she does.  However, no one can be more loved by Mallory than her deceased dog, Duchess.

Lana, the beautiful amazonian black secret agent was the former lover of Archer and is much more technical and by-the-book in her ways of handling the issues at hand.  With her large hands and large breasts to boot, Lana is the desire of many men met in the world of espionage.

Cyril Figgus is the accountant and wanna-be field agent.  The sex addict who has slept with every woman on the agency's roster is a timid, yet sarcastic personality that has quick one liners that if gone undetected, take away from the hilarity of the show.

Cheryl/Carol Tunt is the daughter of a railroad tycoon and receptionist that is addicted to pain, especially in a sexual nature.  Aside from huffing glue and taking care of her pet ocelot, Baboo, Cheryl/Carol is never far behind in the group's adventures, even if she's not supposed to be around.

Lastly, Pam is the head of human resources and is an absolute animal.  She can fit four pool balls in her mouth, runs her own fight club, and is so sexually frustrated that her dialogue is often the highlight of each show.
Be it fighting the KGB or rival Barry, who later becomes a cyborg of sorts, Archer is known for one-liners, proper grammar, and expertise in the field.  His sexual exploits are notorious and his ability drink copious amounts of alcohol is damn near legendary.  Lastly, Archer's homage to Burt Reynolds is a recurring theme that is met head on once the two combine for a mission in one of the series' funniest episodes.

The crew alone create over the top scenarios that either Archer, Lana, or the combination of the two have to fix and resolve with each 22 minute episode.  The first four* seasons can be streamed on Netflix.

I must warn you all, though, that the amount of laughter you may produce may put your health in the "danger zone."

*Editor's note: As of this edit, August 28, 2015, season five has been added to Netflix and season six has finished its run on FX.*