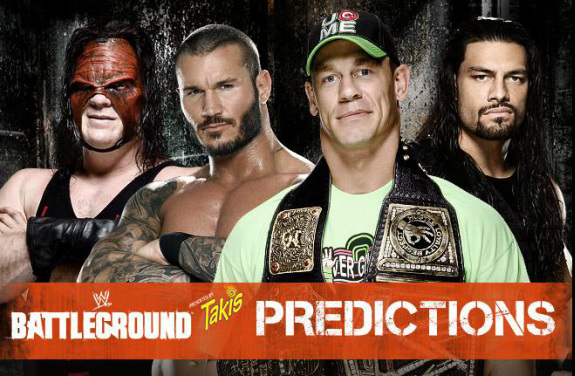 Battleground is upon us and several feuds highlight this deceivingly good card.  On the one hand, it looks like most of these matches are quite predictable, but on the other hand, the excitement many of these matches could create will catch people off guard.

All matches selected are from the WWE Battleground Predictions page on WWE.com

The Funkadactyls have had a bumpy road ever since Brodus Clay became a "Main Event Playa" or at least claimed to be before heading back to NXT and ultimately being let go from WWE a month ago.  Cameron, the first cut on WWE's Tough Enough a few years back, is jealous at the attention that her more athletically gifted partner has been receiving over the last several months.  Her jealousy has caused a riff between the two, thus creating this bore of a match-up.

Naomi will emerge victorious in what we hope can be a five-to-ten minute match between these two rather raw talents.  Naomi will hit the Rear End and say to Cameron, once and for all, "See ya, bye."

Such an intriguing match between these two polar opposite characters.  Bray Wyatt, the cult-like leader of the Wyatt Family, is dark and mysterious who does not speak much, but when he does, people listen.  Chris Jericho is a bonafide legend who is, or at the very least should be, a first-ballot WWE Hall of Famer.  Jericho's range in character is second to none, but with his latest return, he is settling as the fan-favorite face who is full of jokes and witty one-liners.

The two's styles in the rings greatly differ as well.  Slow, methodical, and painful is the pace for Wyatt, while Y2J will look to keep the pace fast with quick strikes and aerial maneuvers.  While Bray Wyatt has been getting the best of Jericho on television the last several weeks, I expect Jericho to put on a great show like he always does and make Wyatt step his game up to another, high quality level.

In the end, Jericho will suffer from Sister Abigail's deadly kiss and fall victim to Bray Wyatt. 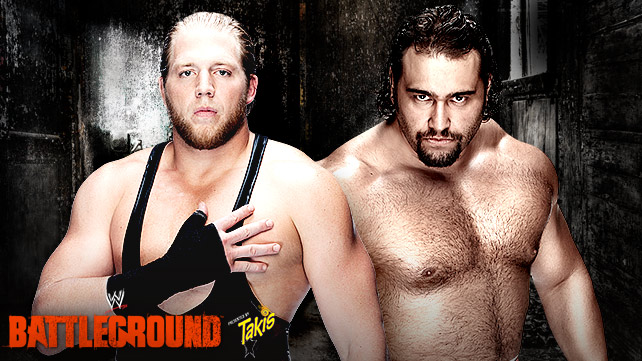 The Real American Jack Swagger may have bitten off more than he can chew when he alongside long-time manager and fellow patriot, Zeb Colter, challenged The Bulgarian Brute Rusev, along with the stunning, leggy Ravishing Russian, Lana.  Swagger, who is a noted All-American wrestler from the University of Oklahoma can stand toe-to-toe with Rusev, but does he have the passion and drive to push past the monster who is undefeated and certainly on a mission to have his dominance be known in the WWE?

Several weeks have passed where Colter and Lana have traded jabs at one another's respective countries and the WWE Universe has made their stance known and firm, but chanting loudly during these segments, "USA!  USA!  USA!" and "We the People! (clap, clap, clap clap clap).  I see a surprisingly athletic and longer battle between these two behemoths, but in the end, the Accolade will prevail and once again, USA will be disappointed.  Rusev by submission.

AJ Lee (C) vs. Paige for the Divas Championship

The two met up in quick, surprising fashions which led to unbelievable results.  Paige defeated a cocky and boastful AJ Lee the RAW after Wrestlemania XXX in her debut to become Divas Champion.  AJ returned the favor of surprise victories when she returned on RAW a month ago, egged Paige into a rematch and regained her championship with a small package.  Once these two have the time to tell a good story in the ring and show what they can do in front of the crowd, the Divas division will give birth to its newest and potentially best rivalry of the last ten years.

With the "Frenemy" storyline coming to a predictable conclusion, I see Paige falling short to the wily veteran and loosing her cool, becoming a heel diva that could pull it off. 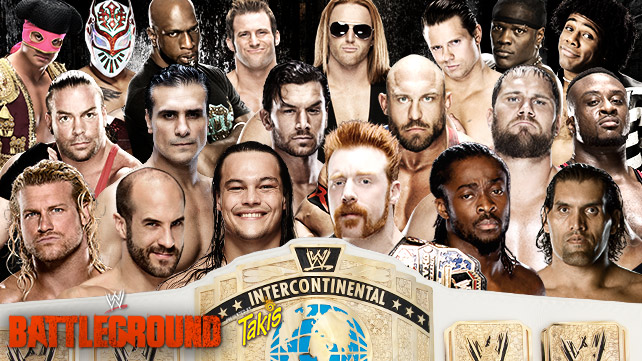 Battle Royal for the Intercontinental Championship

The next line is where the contenders start to stand out with Rob Van Dam, Alberto Del Rio, Fandango, Ryback, Curtis Axel and Big E.  The front row has the most obvious pick for winners with Dolph Ziggler, Cesaro, Bo Dallas, US Champion Sheamus, Kofi Kingston, and The Great Khali.

These matches are always a crap shoot and tough to pick.  Going off of most recent momentum, one has to look at Cesaro, Del Rio, and Kingston as the favorites.

Who I Want to Win:  Dolph Ziggler
Who I Think is Going to Win:  Cesaro

The Usos (C) vs. The Wyatt Family (Erick Rowan and Luke Harper) in a 2-Out-Of-3 Falls Match for the WWE Tag Team Championships

The rivalry between the Usos and the Wyatt Family has been a fun one to follow over the last several months.  The contrasting styles make their match-ups highly entertaining and make for some dramatic spots, like Luke Harper's superplex at Extreme Rules through the tables to the outside.  Crazy stuff.

As always with these kinds of matches, we will see a third and decisive fall.  The Usos will take fall one with either a sneaky roll up or a great combination of moves (ie. a Superkick, followed by a tag, followed by a Splash).  The Wyatts will use their brute strength and violence in the second fall, beating down the speedy Uso brothers to slow down their speed advantage.  Harper will win the second fall with his wicked discus clothesline.

The third fall will be a series of close-calls and "OH!  AH!"s from the crowd.  I predicted last PPV that the Wyatts would win and if they want to maintain their image of a dominant faction in WWE, they need some gold pretty soon.  I predict the high-flying Usos may be grounded after this match.

There's not a whole lot to say about this match.  Ambrose wants revenge.  Rollins wants to survive.  The two put on absolute classics in Florida Championship Wrestling (FCW) when they were first signed on to the WWE roster and I expect no less from these two on Sunday.  Their contrasting styles make for an exceptional match-up that is going to steal the show, mark my words.

Ambrose's venom towards Rollins is something we have not seen in a rivalry in many years and Rollins smug, cowardice heel persona makes this match a must see.  Expect Ambrose to brawl and scratch and claw at Rollins the whole match while Rollins attempts to play a "rope-a-dope" style of defense, looking for that one error the Lunatic Fringe may have during the match.  Ambrose's injured shoulder is a sure target for the cunning Rollins, be on the lookout for that.

This rivalry has only just begun and Ambrose finally getting his one-on-one shot versus his former brother in the greatest faction of the last decade, The Shield, is something that fans have been craving for almost two months.  Rollins, however, will have other plans, like a "Plan B" and escape Battleground relatively intact.


This is by far the most predictable match on the card and I feel bad that I have to spoil it for some people, although they already have the feeling in their gut anyway.

Long story short; no one trusts anyone in this match and based off of momentum, Roman Reigns should win.  If that were the case, he would have won at Money In The Bank last month, but alas, WWE is saving Reigns for a Daniel Bryan-like coronation as the face of the WWE, when they, hopefully, put the title on the big man at Wrestlemania 31 and not a moment sooner.

Randy Orton and Kane are the Authority's lap dogs and will serve their purpose of trying to eliminate Reigns and Cena, but ultimately, their egos will get the best of them and cost each other the championship.

That's where Cena comes into play.  Although the numbers are not in his favor, he has to be the favorite to win just because he is the most clutch superstar in the business today.  Reigns is not ready to run with the ball yet and Orton and Kane just don't make sense.  So, with Paul Heyman's "Plan B" being rumored to return very shortly, there is only one match that will sell PPV's next month with SummerSlam.